Perpetuating the Crazy Again and Again 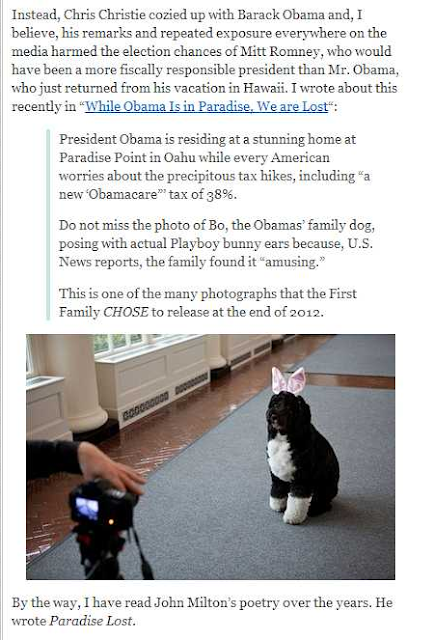 The unhinged level of hatred for President Obama and his family have found a happy home on NoQuarter, the blog of often-wrong CIA analyst Larry Johnson. It has been the go-to site for PUMAs and fanatically devoted anti-Obama zealots. God bless them for trying to come up with material, and I'm still waiting on that whitey tape just like you are.

This particular post, from "Bromwyn," illustrates this perfectly. Instead of figuring out that Mitt Romney was a disaster of a candidate for the presidency, and would have lost New York and New Jersey no matter what, we are treated to yet another hysterical meltdown over Chris Christie, the Obama family dog, and selective attention for things that don't matter.

Who really cares about this stuff? Who is even worrying about these sorts of things? This is what occupies the fevered imaginations of people who have nothing better to do?

I suppose it would be instructive to point out that this post was posted yesterday, and not in mid-November or a few weeks ago. This is what people like this are yammering about like crazy people given a chance to spout off about nothing. Chris Christie didn' help President Obama get elected, nor did he "pray" for Hurricane Sandy to hit New Jersey. If anything, the storm cut into the margin of victory that President Obama would have enjoyed over Romney, who never led and never had a chance of getting elected President. Demographically, there's little chance that a Republican can win right now, or in the foreseeable future. This is not because someone put bunny ears on a dog and took a vacation in Hawaii. This is because the crazies appeal to no one and look unhinged.