One Con Man to Another 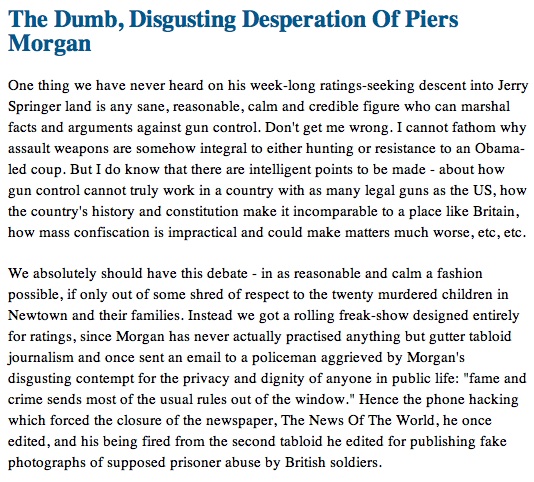 This is where the head of a normal person would usually explode.

Andrew Sullivan, who was and is the practitioner of incompetent hate-journalism, is having a snit because Piers Morgan is more commercially successful (well, on CNN anyway) with a very similar brand of ethically-challenged trash journalism to what Sullivan used to practice up until, when? Thirty seconds ago?

I mean, WTF? Andrew "The Bell Curve" Sullivan, he of the demonization of anyone morally opposed to the invasion Iraq and he of the ability to conveniently forget every liar he ever defended, has the gall to think he can criticize the likes of Piers Morgan? The balls on him, said the ass.

Two Brits who can't find the decency to self-deport themselves and stop practicing whatever they're calling what they do, and one of them has the utter lack of introspection to call the other out for his sins while standing atop a mountain of similar sins. How hilarious is that?
on January 14, 2013