Mr. Kelly Goes to the Mall 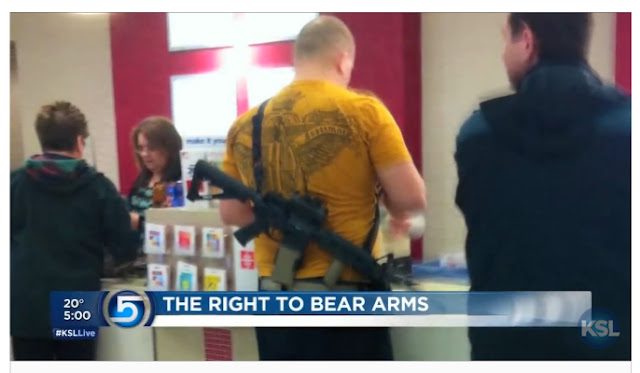 This is a photo of a man in a mall somewhere in Utah. He is not breaking the law, nor is he known to have shot anyone with his weapon. What good it does him on his back is anyone's guess. Why he is not wearing protective gear and a protective vest is beyond me. If you are armed, you should be prepared to engage other armed individuals. To bring a weapon like that to a fight without personal body armor is to invite being taken out.

If this is the new normal in America, then we have a problem because American citizens should feel safe and secure wherever they go. If they do not feel safe and secure, then that's the failure of our society to create areas where people do not need to see backslung weapons. I fault this man more for wearing a t-shirt than for carrying a weapon. He is not ready to defend himself at all. In fact, he is merely inviting his own death by being unprepared.

I grew up in a country that was safe and secure. If someone walked into a mall with a weapon on their back thirty years ago, they would have been laughed at for being paranoid, especially without a bulletproof vest and a bandolier of ammunition. Why aren't these people being mocked for their fears? Why aren't these stumblebums being singled out for their lack of common sense?

What happened to laughing at people who were insecure and paranoid enough to take a weapon to JCPennys? I don't understand why that isn't the central issue here. You certainly do have a right to bear arms. The rest of society has a right to laugh at your insecurity and paranoia when you insist on bearing those arms, haphazardly and in an incompetent manner, into a retail store.
on January 21, 2013