Don't Hate Randy Moss For Being Himself 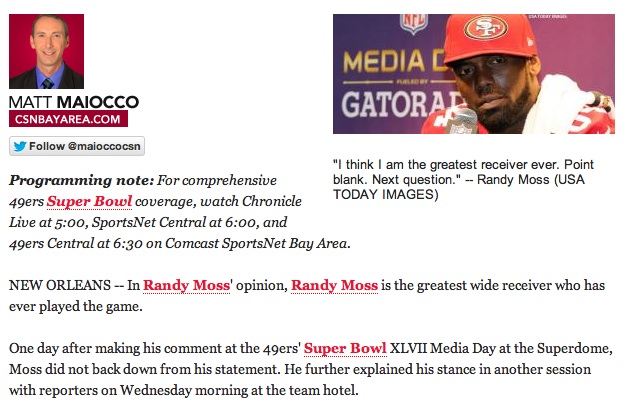 Randy Moss might very well be the greatest wide receiver to have ever played the game. The fact that he is even in the NFL is proof of something that at least backs him up, if only a little. His career is not over and his story has not been told. He is nearer to the end of his career than to the beginning of it, but it has been a typical NFL career. It has not been all wins, all success, and all about being with one franchise. It has been storied, troubled, and messy.

The real test will be on Sunday. If Moss is a factor in the Super Bowl, and if he helps his rookie quarterback and his team win, then he can say whatever he wants about himself. Hating him for being who he is doesn't make any sense, does it?

My pick for Sunday is this: The Ravens will win by 21 points or more. It will be a blow out. Just the fact that the Ravens got through Denver and New England says it all. If some spark happens--if Flacco can't move the ball and if San Francisco can run wild behind their offensive line, then it'll be a down to the wire kind of game. I suspect it will be a boring blowout.
on January 30, 2013