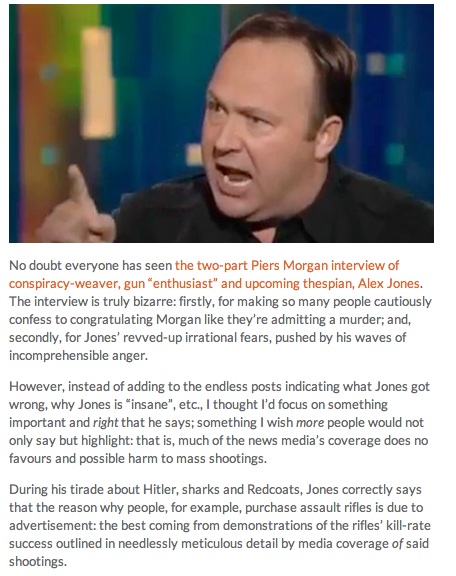 Tauriq Mousa makes the same mistake that contrarians often do: without credibility and context, your source is meaningless if they are afflicted with madness.

Mousa is making the attempt to take the other side here and perform like a good devil's advocate. Despite the fact that Alex Jones has demonstrated time and again that he is a huckster trying to make a buck off the paranoid fears of Americans, there will always be a few who cannot accept that Jones has no credibility whatsoever and should be ignored. We used to have gatekeepers in the media who would shut out such voices. Now, the louder Jones is, and the more vehement the crowd who listens to him and champions him, the harder it is to perform that gatekeeper requirement.

Mousa steps into it here:

Jones’ point is important: whether he or a qualified forensic psychiatrist says it indicates that you ought to be careful of dismissing his points because Jones screams them and believes 9/11 was an “inside job”. To dismiss his points entirely because he acted so bizarrely, is a conspiracy theorist, and so on, is to make an ad hominem attack.

The other thing to take from this then is: Don’t dismiss all his points; don’t dismiss Jones as being representative of everyone who wants to keep their guns; don’t immediately think every conservative is like him. Furthermore, his facts don’t become more or less true because he shouts them at a remarkably calm presenter.

A tragedy has occurred. But that is exactly why we require our best, critical and scientific types of thinking to be in best possible form. If we let only our emotional reactions, whether to shootings or conspiracy theorists, reign, we do nothing to make sure such tragedies don’t happen again.

To dismiss his points is to reject the source because the source has no demonstrable credibility to express an opinion. He is not to be confused with someone who is, in fact, a "critical and scientific type" who can think clearly. Jones is not an expert on anything, save manipulating the media. He has no education to speak of, save for a stint in a community college. Without an education, he turned to entertainment and found success in much the same way that Sean Hannity and Glenn Beck found it--by manipulating people and presenting a public image that could be consumed like a commodity without having anything behind it.

Jones is simply a fraud when it comes to presenting an authoritative opinion on American society. He is a radio host and a film producer who works largely in the realm of conspiracy theories and current events. Anything that falls outside of that has no commercial value to him as a subject because the product he peddles takes fear and misinformation and combines it into something he can sell. That, right there, removes the quotient of credibility. He is woefully unqualified to assess American society and pronounce anything save his own opinion on things because he doesn't make money by telling the truth; he makes money coming up with angles on things that will ramp of fear and cause a fundamental misunderstanding that will push people towards the wrong conclusion. He is commercially successful because of how well he can lie and scare people and this, in turn, allows him to vault past the gatekeepers. But he has no credibility beyond those areas where sympathetic listeners are willing to suspend their own disbelief and live vicariously through Jones.

His facts are wrong. Hitler did not "take the guns." That has already been disproven. So, for Mousa to say that his "facts" are "more or less true" ignores the most basic fact of all--Jones is wrong. Not because he has no credibility but because he is simply, factually, wrong.

Defending him is just contrarian nonsense. Sometimes, a raving madman is simply a raving madman and not some tortured genius who is right once in a while.
on January 13, 2013