Another Fallacy About Guns and Home Defense 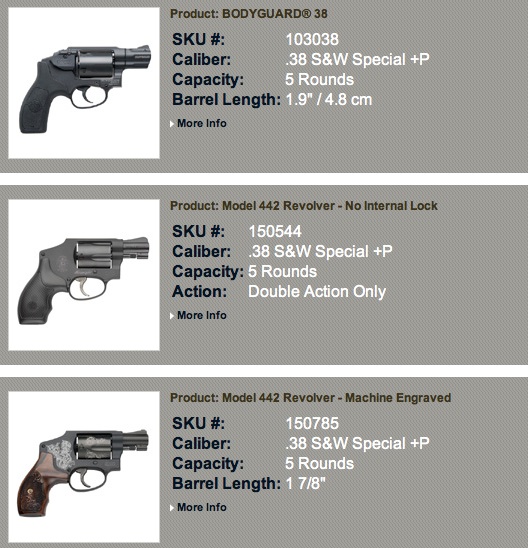 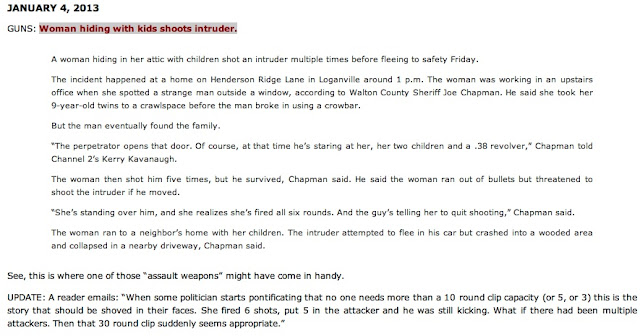 Here is where a lot of people go wrong when it comes to guns and home defense. If you're reading Instapundit, you're reading the "tough guy" nonsense that permeates the arguments of people who really don't understand weapons and stopping power. If you read the original news story, you can see where what really happened can be put into better context.

Instapundit and his assault weapon-loving crowd, have seized upon this story because they think it makes their case. It doesn't.

The woman who defended her family did the right thing. She didn't seek out a confrontation--she defended herself admirably. She used a .38 revolver to put five rounds into a person and that person didn't drop right away. The key words being, "right away." You don't know what a weapon is going to do to another human being. You can be shot several times and function for a little while or you can be shot once and drop like a stone. In this case, the man took the rounds to the body, was able to function for a few minutes, and then collapsed.

Had he been shot the same way with a rifle (kind of hard to do when hiding in a crawl space, but when has logic ever entered into a discussion about weapons?), and especially one with a smaller round than a .38 (most assault rifles fire a .223 caliber round), he might not have dropped right away. The .223 round has a much higher velocity, and it could have killed him outright, but that's where the issues of what to defend your home with come into play.

Had the woman shot the intruder with a shotgun, he probably would have gone down immediately. And that's the point I'm trying to make--defend your home with a shotgun, not a rifle or a handgun. A rifle round, especially one that has a high velocity, can travel through a home, ricochet around, and hit an innocent bystander without effectively dropping an intruder immediately. A handgun can do the same thing. But if you put a shotgun blast into the chest of someone standing over you, I believe you would have a better chance of dropping that person.

Shotguns aren't sexy, and no one is advocating their ban. But if you really think an assault rifle with .223 ammunition and a 30-round magazine is more effective for home defense than a pump action shotgun, then, by all means. Enjoy explaining why all of those rounds bouncing around weren't intended to hurt anyone in the house across the street.

This poor woman was fully justified in defending her home. I am arguing that using this example to say that having an assault rifle would have been better is ridiculous. Why so many "gun nuts" can't explain that shotguns are more effective reveals their own desire to change the subject and avoid talking about what really works.