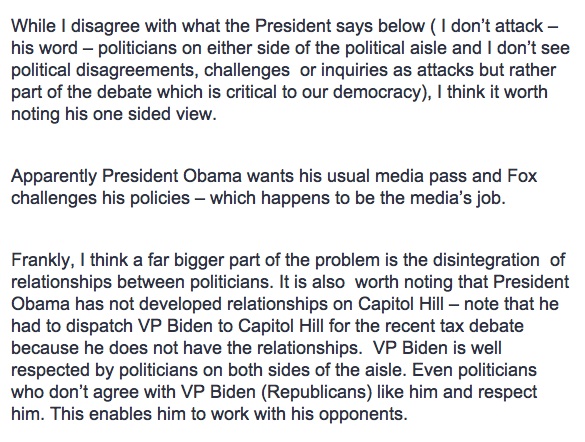 Greta Van Susteren is the "deep thinker" at Fox News. I say that because it took her until the third paragraph to produce three good lies, and then a fourth one that I'm going to single out below.

Lie number 1: The disintegration of relationships? The demise of backslapping and social drinking between politicians has nothing to do with anything, other than making it so that people can no longer argue that "back room deals" and corruption are a part of our government.
Lie number 2: President Obama has to have "relationships" with people to get things done? Which people would that be? The ones who don't think he was born in America or the ones who call him a Marxist all day on Fox News?
Lie number 3: Vice President Joe Biden is routinely mocked and scorned, especially on Fox News, which delights in his gaffes. For a guy with so many gaffes, suddenly he's very popular. And, no. They don't respect him. They don't respect any Democrats. Therein lies the problem.
Susteren's big whopper is this one:

He has not allowed a budget to get to the Senate Floor for years to even begin a discussion.

Really? Harry Reid is the problem now and he's the reason why we can't have nice things? And the fact that the Republican minority in the Senate has threatened to filibuster everything and obstruct our government for four years as a means of destroying the American economy and thus electing a "Republican" last year to the presidency means nothing?
It's as if she's operating inside of a bubble where Mitt Romney was going to win last November, one divorced from accountability and reality. It's as if she's been "drinking the Kool-Aid" for so long that, even after Inauguration Day, she can't stop imagining American politics as it was in her imagination several years ago instead of the reality of today.
Here's what is real: the government is not functioning, the Republican Party cannot govern, and this President got re-elected because no one in America was willing to believe the lies told every minute of every day on Fox News. How's that for an assessment as to what's "wrong" with the President pointing out that people lie every minute of every day on Fox News? Hey, did you notice that or were you incapable of recognizing the simple fact that the people who are paid to analyze American politics and society on Fox News lie every minute of every day? Or am I rude and shrill for pointing that out?
Susteren represents a failed network full of failed ideas, and she can't stop lying to save what little reputation she has left.
on January 27, 2013