A Mixed Bag For the President So Far? 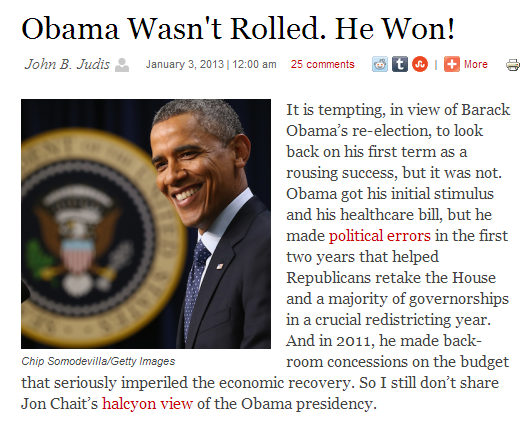 The bill, the American Tax Payer Relief Act, raises tax rates back to 39.6 percent for those making over $400,000; limits deductions and credits for those making over $250,000; extends unemployment insurance; expands the earned income tax credit; and gives Congress another two months to prevent sequestration. Some of my colleaguesargue that he could have gotten more, but I don’t think so. The final result, approved by the House of Representatives, saves the country from another fiscal train wreck. It also positions Obama and the Democrats very well in future fights with a Republican Party that is becoming an embattled outpost for addled billionaires and white Southern revanchists. It may not happen during Obama’s second term, but the GOP may be on the way to marginalizing itself as a political party.

Going into the negotiations over the fiscal cliff, Obama had two objectives. First, he had to prevent tax increases and further cuts to government spending that would imperil the recovery. As the CBO forecast last fall, further fiscal tightening could raise unemployment and slow growth, perhaps even leading to a recession. That’s certainly what happened in the United States in 1937 and in Japan in 1997 when policy-makers were under the illusion that reducing the deficit was the path to economic growth. The compromise, reached by Senate Minority Leader Mitch McConnell and Vice President Joe Biden, protected consumer demand and jobs.

This is the classic view of people who believe in a "long game" and I subscribe to this. The President is trying to create a situation where the economy will improve dramatically enough by the 2014 mid-term elections to stave off having more Republicans on his case and performing their curious brand of oversight and compliance. You cannot expect anyone to want to spend the next four years being investigated by madmen.
The reality of a mixed bag is the reality of governance, though. Rational, thinking adults know they can't always get everything they want, but a process of compromise and negotiation can yield quite a bit in terms of goals and a shared agenda. The process of getting some of what a person wants is infused with a need to be skillful and adaptive. That goes against the all or nothing mentality of a lot of Americans on the right and on the left who want to see the absolute destruction of their opponents and the reduction of complex issues to simple definitions.
I'm happy with the mixed bag; the process is still worth it and it is still something to be proud of. This is the American way. If the Teahadists among us and the nihilists who don't care about anything except for their single, solitary issues can't handle it, too bad.
on January 03, 2013