Wayne LaPierre Has Lost His Mind 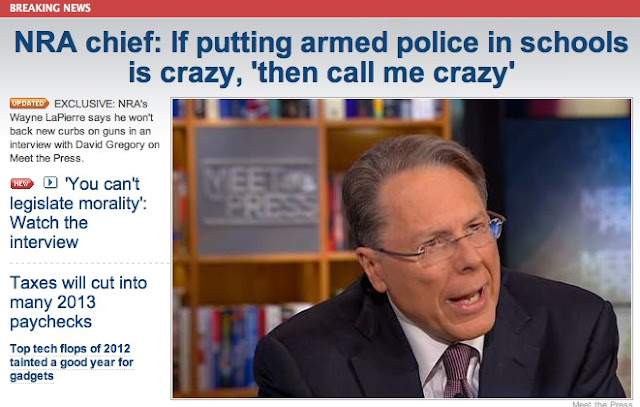 There is nothing politically astute about inviting the general public to agree with you when you asked to be called crazy. Wayne LaPierre has lost the plot.

The American people are ready for some form of limited, thoughtful gun control and for a ban on assault rifles. That's just a fact. But, what's happening here, is a classic misdirection play. As long as LaPierre stays on the message of putting armed guards in every school in the country, no one will talk about handguns and the proliferation of handgun violence in America. And no one will talk about how children are being killed by unattended handguns even as we speak. In fact, when you introduce a gun into a home, it becomes twenty-two times more likely that that gun will kill a family member.

LaPierre represents a lobbying organization, not a public policy organization. The National Rifle Association is the lobbying arm of the handgun manufacturers. It has one purpose and one purpose only--to thwart any effort to keep guns out of the hands of the people who want to buy them. Safety doesn't matter. If it did, the NRA would not be in the position that it is in right now.

Putting an armed guard (and, really, let's think about this) in every school is absolutely unfeasible and introduces more opportunities for death and mayhem than it would ever prevent. First, you would have to allocate resources from strapped school districts to make this happen. That means hiring at least two, if not three to five, armed guards for every school, not just one. You have to give people time off, you have to cover multiple entrances in large schools, and you have to have people protecting two vital elements of each school--the playground area and the main entrance. If you are going to have a single armed guard--a single point of failure--then you have to have someone backing that person up when an armed intruder walks up and shoots the one person in the school who has a firearm.

Second, you have to pay that person and you have to conduct a background check on that person, further adding to the costs of protecting public safety. You could certainly use off-duty or detail police to do the work of protecting schools--that's already in place in many cases. But what happens when that individual is also cut from their position because of budget constraints? This is the classic Republican dodge of reality, and the NRA is overwhelmingly an organization aligned to Republican policies of governance. Budget cuts are the result, more often than not, of a lack of political will or acumen with regards to raising revenue. Taxes, taxes, taxes. If no one wants to raise taxes, where is the money going to come from in order to hire rent-a-cops for schools?

Third, the answer is never "more guns." The answer is gun control. And that doesn't mean taking guns away from law-abiding citizens. It means keeping specific models and types of ammunition magazines out of circulation because of the damage that they can do. It means background checks and limiting access to guns by mentally ill individuals. And it means coming to grips with the fact that there are too many handguns in circulation right now with too many people being able to get them quickly and cheaply.

So, yes. Mr. LaPierre has lost his mind, but he has done so in a way that keeps the focus off handguns and common sense. This is a play for emotions, and logic need not apply. If it did, we'd be talking about solutions instead of these hot-button topics that will not solve anything.
on December 23, 2012