The War on Organized Labor 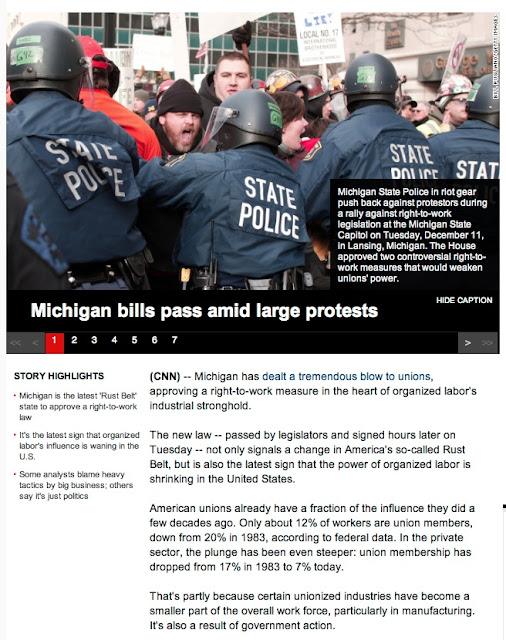 Michigan is now in the front lines of a war on unions that has been going on for decades. Is this even news? Is this even a surprise anymore?

What people do not understand is that, once organized labor is gone, wages are not going to go up in this country. Working conditions are already bad enough, and they're not getting better. The decline in wages, or, rather, the absolute stagnation in wages isn't due entirely to the decline of unions. Far from it--it's due to the destruction of the American worker as an entity that has any ability to demand anything from this nebulous thing called management.

Our politics and rhetoric are, seemingly, entirely on the side of the mythical "job creators" who cannot be taxed and who cannot be criticized. The jobs that they were supposed to create don't exist and the policies that reward the confiscation of wealth upwards aren't going to end anytime soon.

When I look at things like this, I just shake my head. American history has shown us, time and again, when the wealthy are allowed to confiscate more and more of the pie, there is a violent, horrible reaction that shocks everyone into the realization that, "oh, we should have done something about this problem."

The time to do that is now and, instead, everything is going the wrong way.
on December 11, 2012