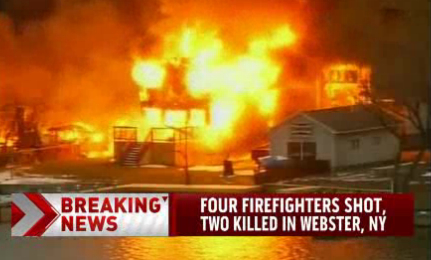 America's failure to station armed guards inside of every burning home is what caused this to happen, if you believe the way that the National Rifle Association wants to frame this issue. I don't.

This was an act of horrible, horrible retaliation against those who are called to protect us, and that's the tragedy here. In order to save lives, firefighters have to be able to respond to events like this without fearing for their safety. Now, there will be delays in responding because firefighters are going to be leery of doing their job without cops on the scene, ready to trade fire with people crazy enough to set their home on fire and go out in a blaze of violent glory (that's my theory here--someone set their home on fire and then waited in ambush--and I could be wrong on that).

Now that people are focused on gun violence, and on the fact approximately 268 Americans are shot every single day, perhaps we can start to have a meaningful, adult discussion about gun violence in this country. I'm guessing that it simply will not happen, but I've been wrong before.
on December 24, 2012