Megan McArdle is Now the Stupidest Human Being on the Planet 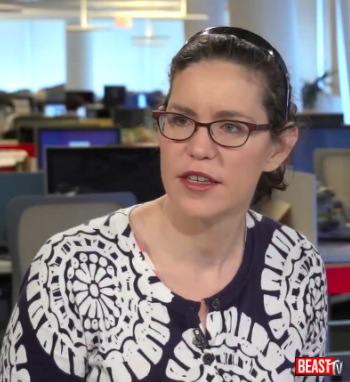 Do you know how hard you have to work to be this stupid?

I'd also like us to encourage people to gang rush shooters, rather than following their instincts to hide; if we drilled it into young people that the correct thing to do is for everyone to instantly run at the guy with the gun, these sorts of mass shootings would be less deadly, because even a guy with a very powerful weapon can be brought down by 8-12 unarmed bodies piling on him at once. Would it work? Would people do it? I have no idea; all I can say is that both these things would be more effective than banning rifles with pistol grips.

If we drill it into "young people" to do something stupid, that's what they might end up doing. And if we're willing to sacrifice 8 to 12 "young people," then I think we have reached a point where all of this is just ridiculous posturing.
McArdle is what passes for a modern intellectual. She is gainfully employed telling people her opinions. We are not blessed with a surplus of smart people these days, nor is common sense much of a comfort anymore. McArdle should be mocked for her opinion and fired from whatever job it is she holds these days. What a disgrace.
Here's what we should do. We should find the will to make it possible to stop future mass shootings by looking at mental health laws, gun laws, magazine sizes, ammunition types, and come up with a comprehensive program that respects the Constitution while ensuring public safety. If you look at what law enforcement, the military, and what people around the world do to limit the availability of weapons designed solely to kill, somewhere in there you can find an American solution that will be the envy of the world. And that's what we should aspire to. We should minimize the disruption to our way of life while using common sense to solve every problem we face by being willing to compromise and work with one another.
That might mean angering the gun lobby. Well, so be it. We don't have a "gun" lobby, really. We have a handgun lobby and that's all they care about because handguns are so lucrative. No one fears the bolt action rifle, but it's one of the cheapest and most effective weapons in the world in terms of being able to be used for hunting and target practice. The shotgun is great for duck hunting, home defense, and target practice as well. No one should imagine that these are the weapons that need to be banned.
Handguns and assault rifles, 100-round drum magazines, cop killer bullets, and anything that fires on full automatic? Please. We already limit machine guns and thus, we already have "gun control." We need common sense and we need it now.

If we're not actively seeking a way to prevent future mass killings, we are betraying the memory of those lost in Newtown, Connecticut.
on December 17, 2012