How Out of Control? 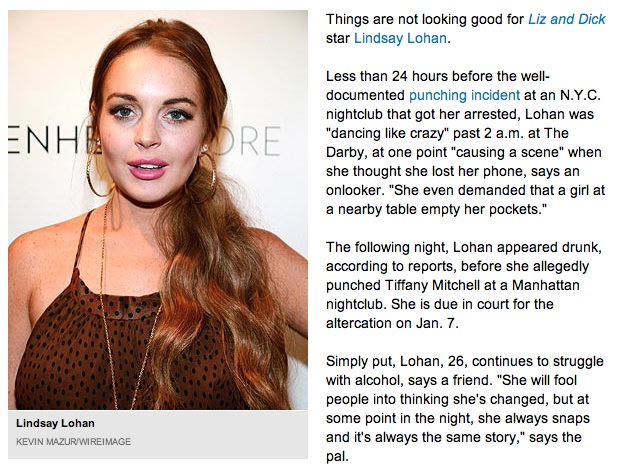 Whenever the celebrity media starts to cover these train-wreck lives, I have to remind myself to take a step back and think about the agendas of the people who are feeding this information to the hungry writers and hacks who produce this stuff.

Is anything here definitively sourced in a way that would lend it credibility? No, and that means that people who are on the periphery are speculating based on what they are hearing. It's a safe bet that Lindsay Lohan is "out of control" because there are enough people out there who are talking about the fact that they think she is out of control.

And that may very well be. But legal problems aren't the same as what goes on in someone's life. You can have a life that is a complete and utter disaster and not have a legal concern or care in the world and vice versa. Lohan's problems tend to stem from the fact that she cannot stop "partying" in public. So, why hasn't she ever figured out how to cut loose in private? Is it because there has to be an element of public adulation involved? Is that because the risk of partying in public, which means attention and media coverage, is really the goal here?

I would say yes. Nothing I have ever read in People magazine has ever struck me as being journalistic. That doesn't mean it is wrong; it means you can't believe it.
on December 04, 2012