ACORN Was Responsible for the Lindbergh Baby 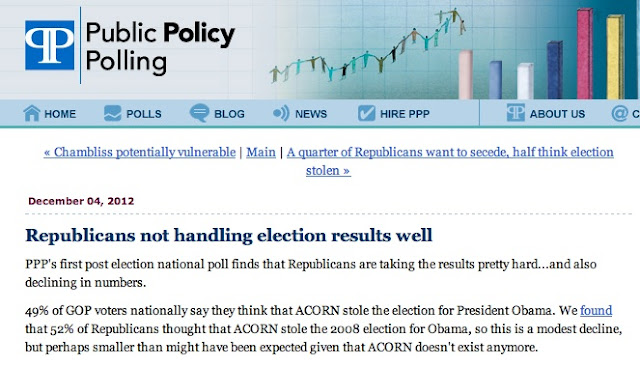 The obvious answer here is to ask, what the hell?

Almost exactly half of the people who voted Republican in this country believe that a defunct organization stole an election that was, without a doubt, an Obama landslide despite the fact that there was widespread Republican voter suppression? Really?

Obama's margin of victory would have been much higher if there hadn't been so much voter suppression. And yet, these individuals are so information-starved that it boggles the mind.

The real story here is--how'd you get so many people to believe so many lies? Because once people figure out how to make people react the way Republican voters reacted in 2012, hold on to your wallet because the advertising people are going to consume that process and make it their own.
on December 04, 2012