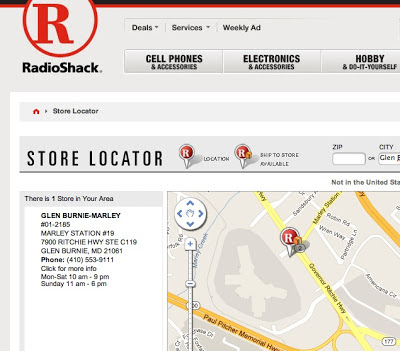 Did you know that there are stores in this country where you aren't allowed to buy things unless you give the person behind the counter your name, your address, your phone number or your e-mail address?

Did you know that having cash in hand doesn't matter anymore? Unless you give up your personal information, these stores will not sell anything to you.

The only store more dreadful than Radio Shack to shop in is Sears; I have stood in Sears, hoping to buy things, and I have been told that I am at a cash register where cash is not accepted; I have been told that, despite the fact that we purchased something, we are not able to pick it up because Sears failed to update our home address after we moved and that our transaction looked like "theft." What a pack of incompetent lies.

But Radio Shack is heading for Sears territory. My wife went into Radio Shack yesterday to make a purchase. She was holding a product and had money in hand. And yet, she refused to tell the people behind the counter what our address was. Four employees suddenly swarmed around her, and so she walked out, intimidated and empty-handed. ***Note from Warren's wife: as a former member of the United States Army as well as a current Federal Government Department of Defense employee, it takes a great deal to intimidate me. However, the four employees were all large men and quite frankly I didn't want the confrontation. I think the thing that irritated me the most was when I asked for an explanation as to why my personal information was required before the completion of the sale, the first guy could not articulate the reason and when he asked the second guy for help, all he said was that was what they needed. After that, the other two guys drifted over and circled around me. That was rather bothersome, to say the least. As my purchase was going to be a gift for our daughter and entering into the store was actually a target of opportunity as the mall is not known for it's electronic stores, I'll just go somewhere else. Really, that's what I should have done all along - or, I can just continue shopping on-line.***

After her experience, I walked into the store and observed their behavior. They were indifferent to customers and engrossed in entertaining themselves. I watched one employee play with a toy helicopter and nearly break merchandise in the store. I watched two other employees ignore me because what the third employee was doing was more important than making a Christmas season sale. No one acknowledged me or looked up. And who could blame them? The store was empty, despite the fact that the mall was packed on a Saturday afternoon. Their customer service was nonexistent and their store looked like a ghost town.

American retail stores are awful, by and large, and it has gotten to the point where you can't buy anything unless you expose yourself to telemarketers and excessive advertising (also known as SPAM). Radio Shack has decided to entertain a curious business model--treat people like crap and wonder where their business went.

Giving an address or a phone number, as a condition of making an in-person retail purchase, should be completely voluntary. As in, ask nicely, then accept no for that answer, otherwise, you risk losing a customer and a sale. And, what's weird is that, ten years ago, Radio Shack had to abandon this practice. Now, apparently, it's back.