Look How Tough They Are 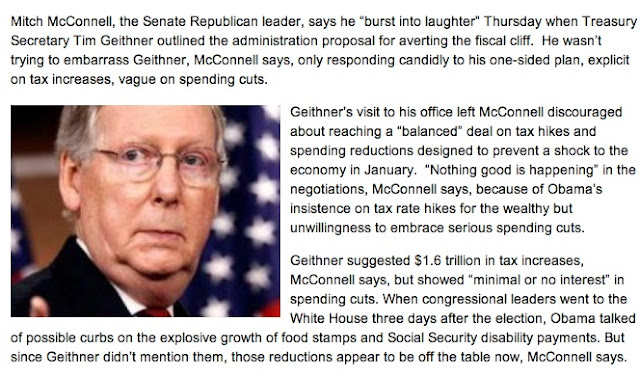 In case you're wondering, no. There's no reason to expect anyone leading the Republican Party right now to be "reasonable."

There's a darned good reason to expect more of the same self-serving garbage you see quoted above. That's why you can read a sentence like this:

He wasn’t trying to embarrass Geithner, McConnell says, only responding candidly to his one-sided plan, explicit on tax increases, vague on spending cuts.

And have a good laugh yourself at the idea that McConnell's delivery of this story to Fred Barnes is honest and forthright statesmanship. It's not; it is patently destructive, obstructionist to the core, and places the political goals of the Republican Party well ahead of dealing openly and honestly with the issues that the American people are being forced to deal with. The only reason why anyone would tell Barnes anything is to get him to spread around garbage and lies. He's never been your go-to guy for anything other than trash.

McConnell wants to be seen as laughing at Secretary Geithner so that he can establish himself as the leader of the Republican Party. It is true--he and Speaker Boehner are the de facto leaders of the party and there's absolutely no chance that either one of them will ever run for president. They have no national constituency and nothing in their politics suggests an ability to lead the way past leaders have done. These are not reasonable individuals. They are more comfortable burning down the house rather than living in it.

Why anyone is going to tie themselves up in knots trying to visit with these people is beyond me. They won't make a deal until the phone banks are melting and when their weaker counterparts are being hounded like wanted men and women. We will not have a deal until they fully wreck the dealmaking process.

Former Speaker Newt Gingrich says that Republicans in the Congress should stop talking to the White House. If that's not an indication of which path is the craziest (Gingrich always chose crazy over practical when it mattered) then, by all means, stop talking for a while.

At the very moment when McConnell and Boehner are desperate for a deal, step on their feet and make them give up twice as much as they are afraid they're going to lose. Beat them politically, and let them deal with their own purity trolls.
on November 29, 2012