Another Classic Bit of Hypocrisy

This is not going to shock you.

John Hinderaker is a hypocrite. Again. In print. And without any shame whatsoever.

Yes, in the aftermath of the Obama Landslide, the wingnuts are flailing around, looking for something that they can hang their hat on.

The problem is, you can't read this without laughing at the idea that, somehow,
President Obama is to blame for everything happening in Egypt right now. 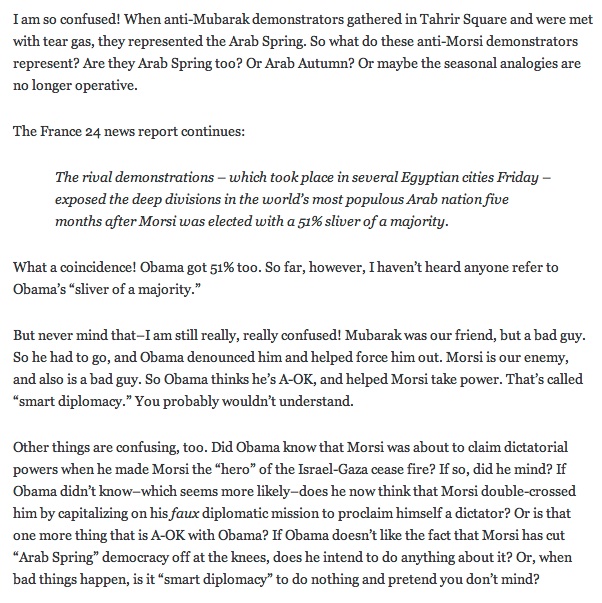 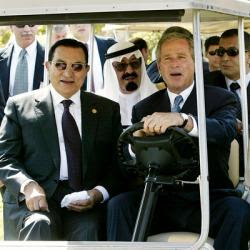 What has largely gone undiscussed, however, is that the United States faced a very similar dilemma in Egypt once before.

Back in 2005, the Bush administration had to make more or less the same calculation. It’s worth revisiting that episode now, if only because it illustrates how difficult a time America has had arriving at an Egypt policy that is coherent, wise, and principled.

In his second inaugural address in January 2005, President Bush declared that America would no longer “tolerate oppression for the sake of stability.” Mubarak responded nine days later by charging the country’s leading opposition figure, Ayman Nour, with forgery. But, at least initially, the Bush administration did not blink. On June 30, Condoleezza Rice traveled to the American University in Cairo and delivered a speech outlining Bush’s freedom agenda. “The Egyptian Government must fulfill the promise it has made to its people—and to the entire world—by giving its citizens the freedom to choose,” she said. “Egypt’s elections, including the parliamentary elections, must meet objective standards that define every free election.”

A few months later, in September, Mubarak waltzed to victory over Nour in a sham presidential election. But everyone had known, and accepted, that the presidential election was going to be a sham. Instead, it was the parliamentary elections, scheduled for November, that both Egyptian reformers and American democracy promoters pinned their hopes to. Because these elections would not result in Mubarak’s ouster, they offered a low-risk way for Egypt to begin to cultivate a civil and competitive politics.

During the run-up to these elections, Egypt’s constellation of opposition parties took the promise that had been made by the United States seriously—and a culture of democratic politics began to develop where none had existed before. I lived in Cairo in 2005 and 2006 and attended political rallies where socialists, Islamists, and more democratic reformers distributed leaflets and gave speeches. Even the Muslim Brotherhood, not exactly a pro-western organization, was grateful to America. “When Secretary Rice delivered her speech saying it was for too long they have been helping dictators, well, that was a good thing,” Mohammed Habib, the organization’s political director, told me at the time. “This recognition was good for us.” Not surprisingly, the Brotherhood fared well once the voting got underway.

Consistency would make the poor Hindrocket explode.
on November 24, 2012