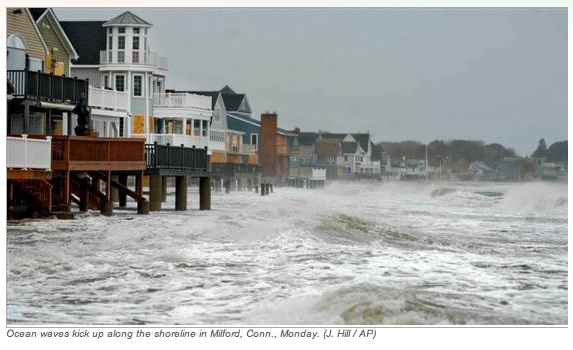 Maybe if we had both of our major political parties behind the idea that we are all Americans, that we are all citizens, and that we should pull together and help one another, this sort of thing wouldn't be the headline:

“I think this one’s going to do us in,” said Mark Palazzolo, who boarded up his bait-and-tackle shop in Point Pleasant Beach, N.J., with the same wood he used in past storms, crossing out the names of Hurricanes Isaac and Irene and spray-painting “Sandy” next to them.

“I got a call from a friend of mine from Florida last night who said, ‘Mark, get out! If it’s not the storm, it’ll be the aftermath. People are going to be fighting in the streets over gasoline and food.’”

President Barack Obama and Republican Mitt Romney called off their campaign events at the very height of the presidential race, with just over a week to go before Election Day. And early voting was canceled Monday in Maryland and Washington, D.C.

I can see why people like Palazzolo say things like that. It's not because of mushy liberals who want to tell your kids what to eat for school lunch. It's because of people who scream about God's will, gays, and how someone with brown skin is coming to take all the jobs away. It's because of people who sneer at the idea of funding things like FEMA and at the very basic idea that government actually can take care of people when there is a crisis.
More defense spending? Sure. But cut everything else and give tax breaks to billionaires. It is how one party in this country views reality.
on October 29, 2012