What's Wrong With Remaking A Star is Born? 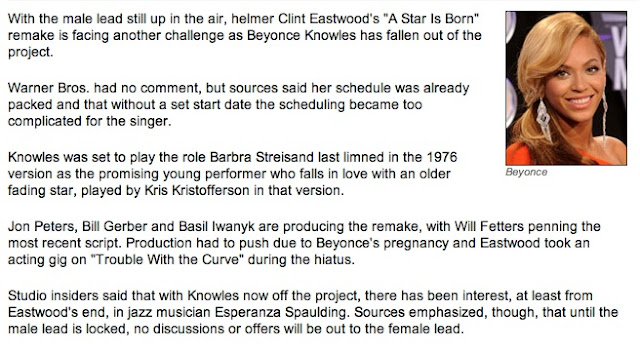 There are a couple of things at work here, and they don't really have anything to do with Beyonce. I'm thinking that a "busy schedule" means "not interested anymore" in reality-speak because why else would you say no to making a movie with Clint Eastwood?

Does Beyonce have too many Academy Awards? Because Eastwood is a lock to pick up some serious awards if he can find the right actor and actress to fill these roles.

Unless, of course, the project is falling apart. Perhaps Eastwood has chosen to go in a direction that the people advising Beyonce think will result in the film bombing. Perhaps he's lost it--witness his recent performance at the Republican National Convention. Eastwood has another creative issue to contend with. re is no separating the roles from the original actors. How do you replace Kris Kristofferson and Barbra Streisand? How do you top what they had on the screen?

Given the safe choices, bland marketing, and firm insistence on portraying the consequences of being interesting, who would step into the role of a lifetime and leave it on the screen like Kristofferson did?

Make the film with nobodies and hope it makes enough money to pay everyone off. The original is just too good to try and top.