This Election Will Be Stolen 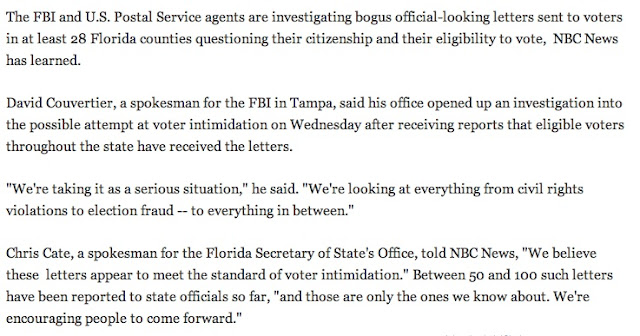 This is just another example of the media finally coming around to the realization that voter fraud and voter intimidation are going to be used to steal the 2012 election.

Will anyone trust the results? No, of course not. Republicans won't accept the results because they believe elections are being stolen by poor people who don't have the right to vote; they are basing this on a myth. Democrats won't accept the results if Mitt Romney wins because there is widespread evidence that state governments under the control of the Republican Party are going to use dirty tricks to disenfranchise voters; this is called living in a reality-based world.

It doesn't matter who is arrested or is responsible for these letters because they are part of a larger calculation. This election is going to be stolen, one way or another, because the simple idea of one vote per citizen might result in an outcome that the Republican Party cannot accept.

So, no. This is not a "both sides do it" issue. This is about disenfranchisement and going back to poll taxes and gun-toting thugs outside of polling places. It is un-American to deny anyone the right to vote; but that doesn't figure into holding on to power. It never does.
on October 25, 2012