The Romney Spin on a Terrible Debate 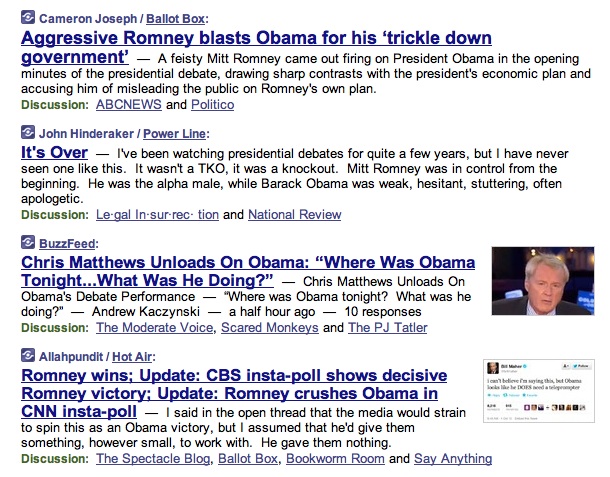 All I can say is, "which debate were you watching?" And "of what value is an Internet Insta-poll when it comes to actually analyzing what happened here?" Memeorandum is chock full of bullshit.

The debate was a bust. Jim Lehrer was not in control and Mitt Romney acted just like the defensive secondaries did in the first three weeks of this NFL season--the players gamed the refs and got away with fouls and only the people who were really watching the game and knew how it was supposed to be played could spot what was happening. With Romney, his so-called "alpha male" tactics were the bullying moves of a salesman being asked to get out of the family living room.

If the polls move because of this, so be it. If this is what people want, let them have four years of the post-truth era of Republican governance. See what's left of the Middle Class when these people are done funding the dreams of a moneyed elite living in armed conclaves while everyone else plays a bastardized form of the Hunger Games complete with Medieval weapons, open sores, and shoe-shine jobs for the lucky ones.

Each and every time Romney lied, no one called him on it. President Obama cannot get angry in public and he cannot be as aggressive, and Romney's handlers know this. But the unrelenting pack of lies and distortions used by Romney to force the debate moderator to sit there, stuttering and pleading for a return to the rules of debate decorum were so thick and frequent that there isn't a factchecker out there who could keep up.

The Mitt Romney that ran to the right of everyone in the primaries is long gone. In his place, the left-leaning moderate governor of Massachusetts showed up and pleaded his case with an armload of lies and a lopsided grin. There were no zingers, only bushel baskets of half-truths and whoppers. The biggest lie of all had to be when he talked about balancing the budget without raising taxes, by putting over $700 billion back into Medicare, and by spending TWO trillion damned dollars on a military that is simply not going to be fighting anymore foreign wars for a good long while.

The lies were so frequent, it was impossible to keep up. Romney lied about how he got things done. He lied about health care. He lied about taxes. When Romney said he would not cut Education funding when he, himself, led off the debate by saying that he would throw out any government program that is not absolutely necessary, I thought it was the end of truth in government.

All that's left are lies. And our media isn't focused on that--it is focused on getting out the narrative that Obama lost this debate. Really? By telling the truth, the President lost?