The Myths the Media Creates 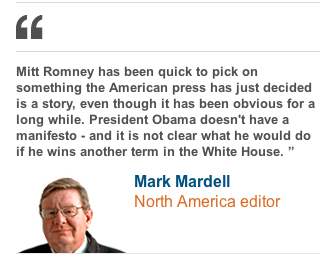 I'm not sure where Mr. Mardell gets his information. It might be directly from Mitt Romney's stump speeches. But there is a "manifesto" for the Obama campaign, and it is actually fairly detailed and lengthy. There are positions taken on numerous issues, but I'll give you three that truly matter.

One, the Obama Administration is going to bring the troops home from Afghanistan. If that's not a good reason to vote for him, then by all means--support Mitt Romney and his endless war on whoever his neoconservative advisors tell him to bomb. Ending the war in Afghanistan is going to go a long ways towards restoring America's ability to rebuild itself. We need to bring the troops home.

Three, there's this thing called Obamacare. It starts to really kick in during what might be the second term for President Obama. It is an essential part of rebuilding this country and giving people some form of relief from health care costs.

So, no agenda? No manifesto? Please. That's simply repeating the latest line of attack from the Romney campaign, which has been devastated this week by a poor debate performance and "binders full of women" and having Paul Ryan elbow his way into a soup kitchen and wash clean pots and pans.

The agenda and the manifesto is this: Ending the war in Afghanistan, rebuilding the Middle Class, and implementing Obamacare, along with a whole host of other ideas and proposals. If people can't see that, I don't know how much simpler to make it.
on October 21, 2012