Some Girls, They Rape So Easy 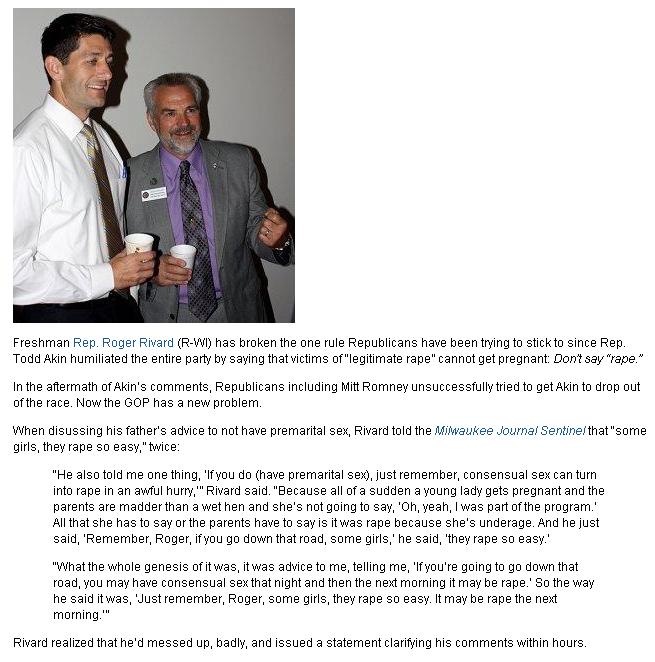 If you're Roger Rivard, and you're a Republican who is trying to have some semblance of a political career, you would think that going on and on about rape would be something you'd want to avoid. In his case, no.

This is what happens when someone starts talking about "the good old days." It leads to a resurrection of ideas, customs and practices that normal people would now find to be abhorrent and outdated. But, in Rivard's mind, he's relating something his father once said to him. It would not occur to him to filter this advice through common sense nor would it occur to him that his father may have had outdated ideas based on superstitions, lies, or rumors.

It did occur to Rivard to try to make the case that not having premarital sex has always been a wonderful thing in his eye, particularly because it reinforces his own political agenda. If he can relate the horrible advice given to him by his father, who had the ridiculous idea that young women would cry rape if they got pregnant, then he can justify things like cutting spending on preventing teenage pregnancies, sex education, and anything "icky" to people who spent their formative years terrified of having sex.

What should come out of this is the realization that if you're going to elect people to political office, maybe knowing whether or not they have strange and outdated ideas about the world would be a good thing to have in hand before casting that vote.
on October 15, 2012