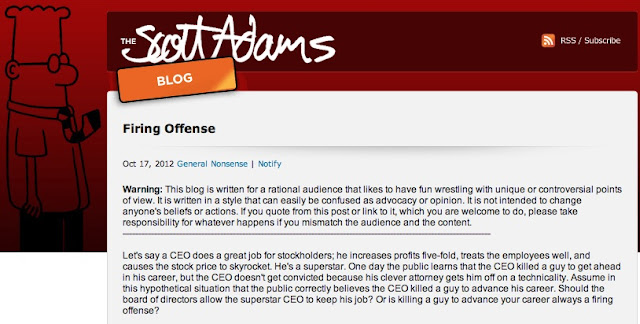 Scott Adams, of Dilbert Fame, has garnered himself some badly-needed attention today by endorsing Mitt Romney because President Obama's administration has done one thing to upset him.

Romney is likely to continue the same drug policies as the Obama administration. But he's enough of a chameleon and a pragmatist that one can't be sure. And I'm fairly certain he'd want a second term. He might find it "economical" to use federal resources in other ways than attacking California voters. And he is vocal about promoting states' rights, so he's got political cover for ignoring dispensaries in states where medical marijuana is legal.

So while I don't agree with Romney's positions on most topics, I'm endorsing him for president starting today. I think we need to set a minimum standard for presidential behavior, and jailing American citizens for political gain simply has to be a firing offense no matter how awesome you might be in other ways.

Romney is not "likely" to carry out the same policies; Romney is most emphatically going to make it more difficult to pursue the legalization of marijuana for any reason. And he has said so, within the last few weeks if you can believe it.

I mean, honestly. You're going to vote for the guy who doesn't even drink alcohol, thinking that will mean that it is more possible for the legalization of medical marijuana to happen?

If you go around endorsing candidates when their opponent does one thing to personally upset you or make you mad, you might want to know a little something about the issues before you do so. In this case, The Obama Administration has continued to fight the outdated war on drugs that many people have come to despise. There's no question--the Obama Administration needs to start moving in a different direction with regards to medical marijuana and the dispensaries that deal in it. But that's hardly a reason to cast a vote for Mitt Romney; in fact, how could anyone be that one-dimensional and foolish?

Adams doesn't understand how Mitt Romney operates, and he doesn't shy away from beaming about the fact that someone at Reason has said something nice about him. Well, Adams needs to read Reason more often:

The cognitive dissonance doesn't end there. Yesterday, Lee Fang reportedin The Nation that Mel Sembler, Romney's Florida fundraising chair, has bankrolled opponents of Amendment 64, which would legalize recreational use of marijuana, to the tune of $150,000.

Sembler is famous for having co-founded the militant and abusive teenage rehab company STRAIGHT Inc., which closed its doors in 1993 after investigators uncovered a trend of “unusual punishment, infliction of pain, humiliation, intimidation, ridicule, coercion, threats, mental abuse…and interference with daily living functions such as eating, sleeping and toileting.” (Full disclosure: As STRAIGHT was shutting down, my sister was forcefully enrolled in a successor program started by one of Sembler's proteges, called SAFE, Inc. It followed Sembler's playbook to the letter, and closed its doors after a decade under a similar black cloud of civil suits and government scrutiny.)

If Romney's ties to a drug war profiteer suggest to you that he'll be worse on drug policy than Obama, think again: Not only is Sembler fighting for Romney, he's also making bank off Obama's commitment to improving drug testing technology and the Office of National Drug Control Policy's anti-drug PSAs:

Scott Adams can endorse whoever he wants but let's not pretend that he's making an informed or rational decision.
on October 18, 2012