Sadly, I Have a Gift For Pushing Buttons 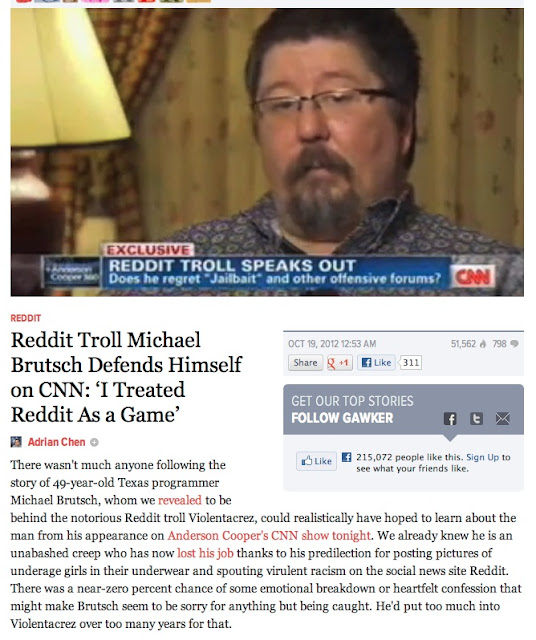 Michael Brutsch has attempted to give a self-serving interview, and it really speaks to how detached from reality people can get while in an online environment.

Brutsch is an adult; he refuses to "own" his own skills as a troll on the Internet. He's trying to look downcast, thoughtful, and sad because the ramifications of what he has done are costing him his livelihood and a great deal of dignity. He uses the phrase, "Sadly, I have a gift for pushing buttons" as a way of explaining himself. So, in the conflation of talent and ability and an extreme disregard for other human beings that he brings up, there's a requirement that other people should join you lamenting how great you are at making others miserable? I don't think so.

The problem with his apology is that he immediately went to the pathetic excuse that Reddit "encouraged" this sort of behavior. This is no different than being part of a mob on the street, tipping over cop cars and setting buildings on fire. It is not an excuse for anti-social behavior and it is not an excuse for the "creepshots" and the distribution of photos of underaged females.