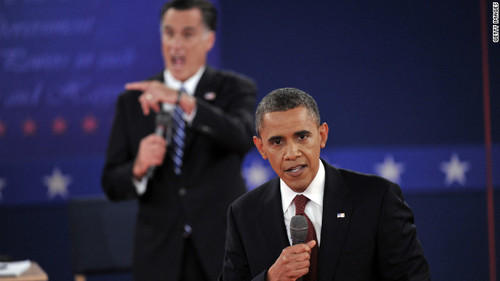 President Obama did himself a huge favor this evening. He allowed himself to dismantle the Romney candidacy without bothering to get "angry" or "insulting." He calmly and assertively did what he was supposed to do, which was win.

Romney, on the other hand, has gone off the rails. Binders full of women will ruin his chances in the weeks ahead. It may be the most persistent meme of the entire campaign so far because it has really taken off among people who, you know, want their own meme.

This photo underscores the importance of Romney's public meltdown. He blew it, and he blew it bad. He got caught in a John McCain/awkward moment.
on October 17, 2012