Mark Levin Is Absolutely Sure But Doesn't Know Anything 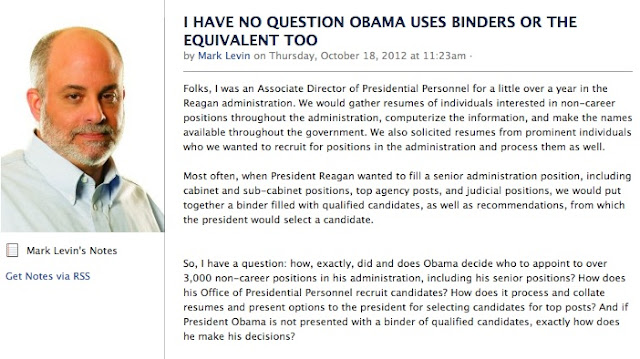 Let's explain why this is utter nonsense and have a little fun at Mark Levin's expense.

Second of all, let's be clear--Levin doesn't know if President Obama uses "binders" full of women to find candidates. He just believes that this is how things are done. Facts mean nothing when you believe something. So, instead of having evidence or proof, Levin goes with his gut. That's the way things are done on the right in this country. The gut is more important than the facts.

Third, Romney lied about the binders. He talked about them in a way which instantly ratcheted up the "creepy" factor surrounding a guy thumbing through binders full of women. It came out creepy, and that's why he got nailed for it. And then, the revelation about his lies came out. Instead of asking for them, they were given to both of the candidates in the race in which he ran so that more women candidates for positions would be selected. Romney rarely, if ever, hired women or people of color when he ran Bain Capital. That's not what anyone's gut says--it's just a fact.

So, you know. If you're Mark Levin. Go with what your gut tells you. Because he worked for Reagan. And Obama does it, too. Facts are for people who didn't work for Reagan for less than a year, okay?
on October 19, 2012