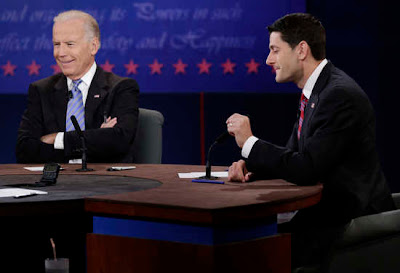 Each and every time it came down to being passionate, knowing the facts, and being able to take a gut check of what's right for the American people, Biden nailed it.

Paul Ryan looked scared, inexperienced, and so far out of his depth that I think he seriously damaged what little credibility he still has left. He brought up someone who was in a car accident, mentioned the name of John Kennedy, and wouldn't answer direct questions. He couldn't have done any worse than if he had put a propeller beanie on his head and tried to talk about war atrocities.
on October 11, 2012