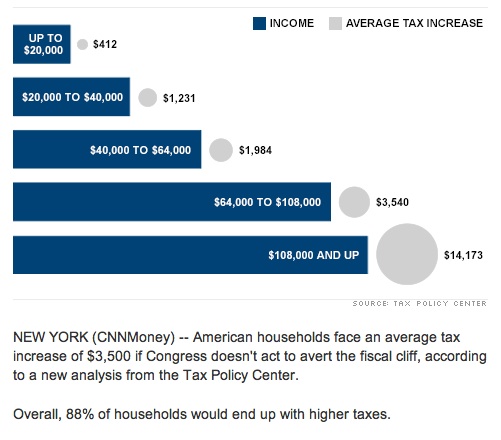 I'm not sure if I buy the premise of this article.

It tries to lessen the blame by saying that this is something that "Congress" has to do.

Really? To my reckoning, this is largely going to come about and become a crisis only because a handful of Republican representatives in the House have staked out a radical position in American politics, one at odds with our history. Namely, there is an effort out there to inflict as much pain as possible (or do nothing to avert this pain) so that the Democratic Party can take a hit at the polls and allow the Republicans to destroy the President.

Where is the evidence that President Obama hasn't tried to work with these people? He's been criticized again and again by Democrats for trying to work with Republicans. And now the American people are being held hostage, once again, so that the obstructionist Republicans in the House can continue to wreak havoc on our country.

The President is not pushing us towards a fiscal cliff. The media gets it wrong every time. The Republicans are manipulating the media and popular opinion to make it seem like nothing is getting done. Hello? Remove the politicians who won't negotiate in good faith and see what happens.