Allen West is a Disgrace to the Military 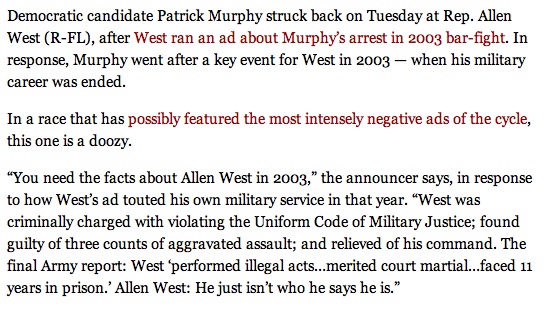 Of course Allen West is angry. He's angry because Mr. Murphy has, rightly, pointed out something which should preclude West from being in public life. Namely, the fact that he was relieved of his command.

The U.S. Army did not exonerate West. It ended his career. No matter where you fall on the political spectrum, the verdict has not been challenged. And it speaks to another issue--that of privilege. If West has been an enlisted man, he would have served time in prison.

No one can contest the findings of the Army in these matters. No one can contest the fact that West had his battalion taken away from him. And what he did should be scrutinized more fully. His soldiers beat the man that he fired his weapon near. The man gave up whatever he could to try and save his life. That information had no value whatsoever. But West accepted the verdict of the Army to save himself the possibility of being punished more severely. Instead of defending himself, he took the deal they offered him. Not exactly a role model for anyone, is he?

Murphy's ad hurts West with people who have actually served, not just with the general public. He is not an example of how an officer should behave. Quite the opposite. He is a flake and, hopefully, a soon-to-be-ex-Congressman.
on October 03, 2012