With Everything Going South, Hand Out More Bonuses 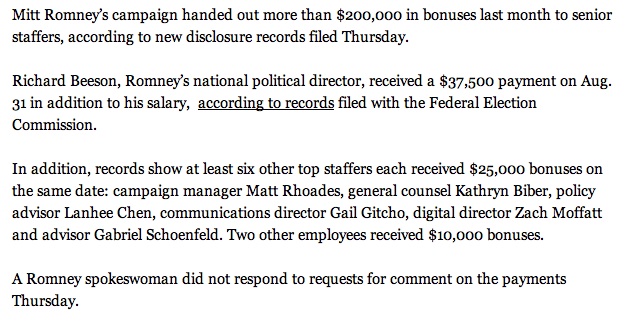 The Romney campaign is, to put it in terms of hash tags that I love, a complete and utter #romneyshambles. It is imploding. It is coming apart at the seams. The supporters of Mitt Romney are reduced to juvenilia and screeching. Many are jumping ship or refusing to endorse the campaign.

Now, we see this, and it is time to wonder--what would you do if the campaign was really in trouble? How can you justify handing out bonuses BEFORE the election is over? The thing that you would maybe want to do with a bonus is use it to motivate people to go a great job so that you can win the election, not the nomination.

The nomination was sewn up months ago. And you're handing out $200,000 in bonuses for a campaign that is trailing by as many as 7 points?