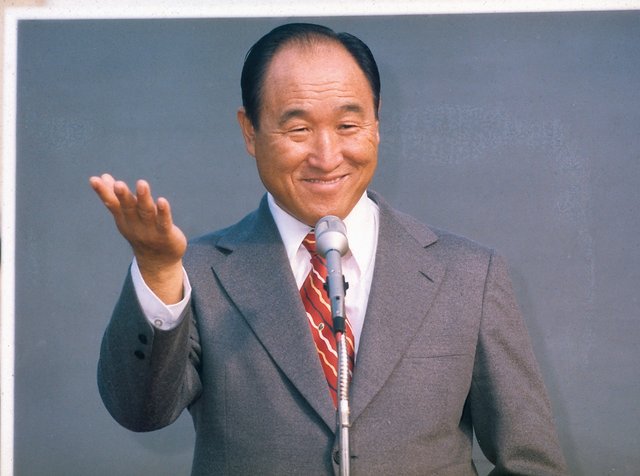 The elegant hagiography of the Washington or "Moonie" Times can be found here:

The Rev. Dr. Sun Myung Moon, the leader of the Unification Church and founder of The Washington Times, died early Monday in South Korea. He was 92.

He passed away just before 2 a.m. local time (12:54 p.m. EDT Sunday) from complications of pneumonia at Cheongshim International Hospital outside Seoul, while surrounded by family, friends and followers, according to Unification Church leaders.

A comment was not immediately available from Unification Church International President Hyung Jin Moon, his youngest son and appointed successor of the religious movement. But Rev. Joshua Cotter, vice president of the Unification Church USA, said Sunday that “the Reverend Sun Myung Moon, revered by millions as the Messiah and True Parent, who was born in Korea but who lived more than 40 years in America … has ascended.”

Reverend Moon was proof that America is the perfect place to foist a half-baked cult onto people. It's fun, it's profitable, and no one can shut you down because America is where religious fundamentalists are allowed to practice their faiths as if they were corporate businesses.
Unless and until we figure out that religions such as this, and shysters like the Reverend Moon, should be jailed, imprisoned, and fined for their misdeeds and their "churches" taxed like crazy (Scientology, everyone in the room is looking at you), you can expect more of his ilk to pollute society with nonsense, bullshit, and a savvy marketing plan. The weak and the feeble-minded are the low-hanging fruit that these people like to pick. America will always produce these needy, clingy people.

Part of what makes us a great country is knowing that a filthy criminal in sweaty pants can rob them blind by giving them the kind of hope that makes people giggle and pretend to see Jeebus everywhere.
He was no Messiah. He was a crook, and there isn't enough torque built into a commercial grade backhoe to screw his rotted corpse into the ground. They will have to build something from scratch using a bulldozer chassis and a hydraulic rig from a James Cameron film and hope they can work at least 12% of the old bastard into the sod before his maggots emerge and begin begging for change at the airport.
on September 02, 2012