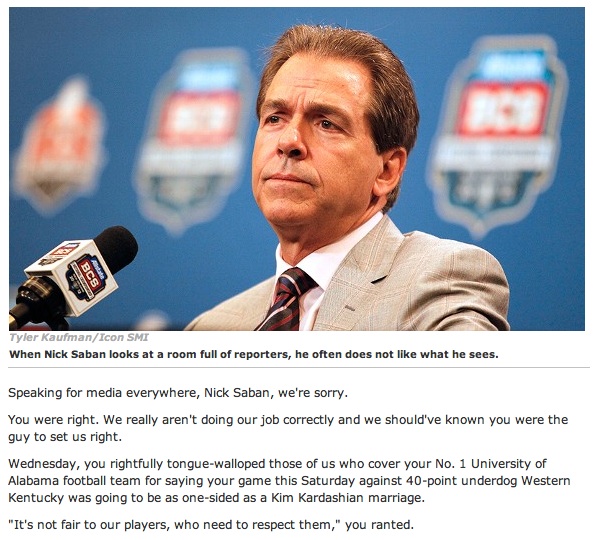 How does Rick Reilly manage to manufacture such a lopsided pile of phony outrage?

That's all he trades in with this column--phony outrage masked behind decade-old Internet snark. What a waste of space.

Nick Saban made a very significant point that should be acknowledged with something other than Reilly's immature belief in the ownership to his own peculiar brand of smarty-pantsedness--no team should ever go into a college football game believing it won't be tested.

If Saban wants to rant at the media for making his game against another team into a joke, he should be free to do so. His players need to be prepared to meet any challenge that comes their way on the football field. It is not outside the realm of possibility that Saban was merely trying to ensure that the appropriate level of urgency would be present when his team went out to play.

That does not mean that Rick Reilly gets to phone in another column full of nothing.

Anybody can beat anybody--and if that's not part of who you are as a coach, you're not going to get anywhere nearly as far in coaching as Saban.
on September 09, 2012
Email ThisBlogThis!Share to TwitterShare to FacebookShare to Pinterest
Labels: Coaching, College Football, Editorial, Football, Incompetence, Journalism, Media, NCAA, News, Sports