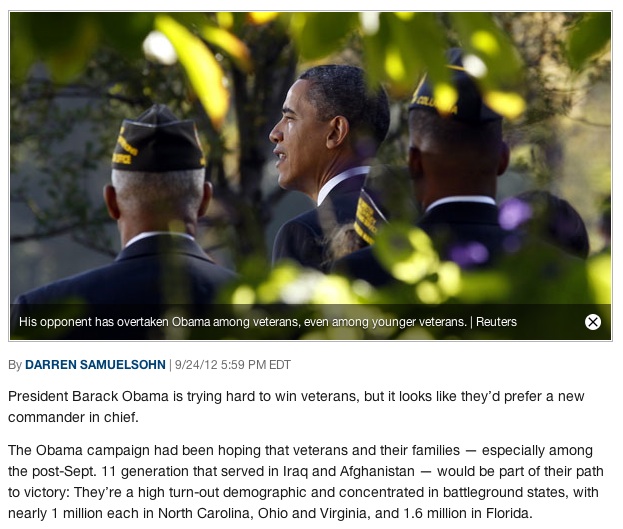 This worthless article goes on to say that Mitt Romney is beating the President when it comes to Veterans and my reaction to this is, so what?

In 2008, Veterans voted for John McCain over President Obama 55 to 45; if you're telling me that those numbers haven't changed, then a collective shrug is in order. In other words, Reuters has manufactured and anti-Obama story out of absolutely nothing.

If my fellow vets think they can get a better deal with Romney and Ryan, oh well. It's the standard Republican trick--talk up vets when there's a war on, cut their benefits when the war is over because of "fiscal responsibility." There was no fiscal responsibility to be heard from these people when they were creating hundreds of thousands of Veterans during the Bush Administration. To date, many of those guys and gals are either on their way home or looking at an extended tour stateside, and not their fifth, sixth or seventh tour in the slums of Baghdad.

Reuters is a worthless new organization, and this article helps reinforce that fact.

And, for the record, the President is Commander in Chief of the active duty armed forces only; not the country, and not of the people who no longer serve. Unless they are on a status where they can be called back to active duty, the President is no longer their "Commander in Chief" because they are now retired and released from further Federal obligations.
on September 24, 2012