MItt Romney Is Going to Run on Romneycare 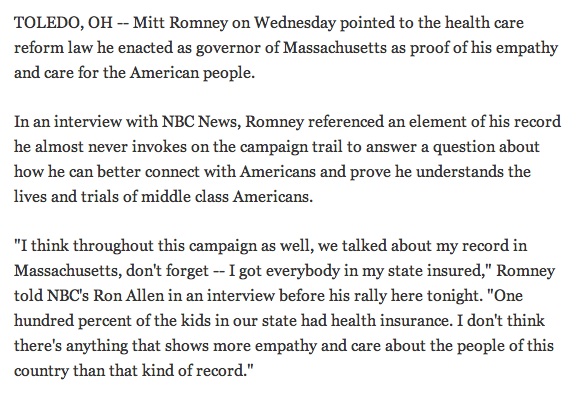 That sound you hear is the collective explosion of thousands of little pinheads, all of them bloggers who think Mitt Romney isn't extreme enough or conservative enough. Right now, they are howling and screaming because Romney has, finally, grasped one concept few thought he would ever take a hold of--you cannot run as an ideological extremist and win the Presidency. You have to be mushy and in the middle of the road (which is why Conor Friersdorf simply cannot bring himself to vote this year--alas).

Romney has finally decided to hold up Romneycare as an example of one aspect of his record that people might like. Damn straight they like it. They liked it so much a few years ago, they christened it Obamacare and that's what you have right now.

Congratulations, wingnuts. You might actually win the Presidency, provided you can all hold your nose and vote for the liberal in the race, which is Mitt Romney.

Adam Serwer rightly notes that Romney has been running away from Romneycare for years. His message discipline seems to be completely and utterly off the rails at this point.
on September 26, 2012