How Fair is it to Call Baltimore an Ugly City? 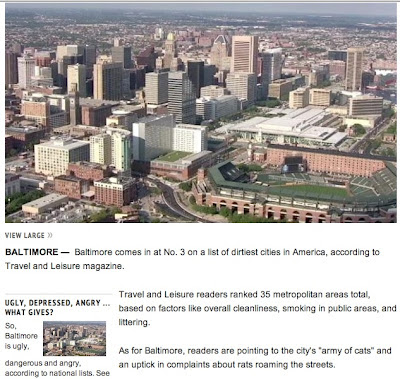 I don't know how fair it is to call Baltimore an ugly American city.

Having lived near Baltimore for the better part of the last ten years, I can tell you that it is a city with its own special character. It's not an attractive city, nor is it an awful one. It's an old Mid-Atlantic city that has a lot of strikes against it.

In the first place, Baltimore's problems are easy to identify. Money has always been short. Corruption, misplaced priorities, and a dwindling tax base have hurt the city.

In the second place, what about American's overall economy? Doesn't that have a lot to do with what is ailing cities like Baltimore? And, let's be honest--Baltimore is no Detroit, that's for certain.

In the third place, aren't these rankings misleading? You can live in an aesthetically pleasing place, but if you can't find the services you need and if you can't get around, you're not really experiencing quality of life, are you?

The shock of seeing Baltimore for the first time in a few years has settled in with me, and I remember what I liked and didn't like about the city. I really, really like the Fell's Point area, and I'm glad to see the waterfront revitalization that is underway. Times are very, very tough, but there are some great places to visit down near where they used to film the old Homicide television series. Baltimore needs another show like that--one that shows the grit and reality. It needs another Wire. It needs to be seen, every week, to be understood.

Fells Point looks like it has really started to become viable. Downtown didn't look too bad either, and with the Orioles looking good and Ravens football underway, you have to come back to the phrase, "why the hell not?" Are you going to get robbed or shot? Well, deal with it. You can get robbed or shot anywhere.

As the nation's economy starts to rebound, look for the coffers to start to refill in places like Baltimore. When that happens, the downturn in city projects and improvements should slowly start to reverse. Once we get through this, cities will start spending money again because that's what moves things forward. You have to hope they can hang on until things turn around.

I keep trying to explain this to people--what would Mitt Romney do for a city like Baltimore? Nothing.

Muddling through is tough, but that's what it is going to take until the economy can be brought back to a reasonable level of sustainment and growth. We need to put people back to work, and we need to get on that now. So, if your town is ugly, ask yourself this--is it because it has always been ugly or is it because there aren't any jobs?
on September 20, 2012