Who Is Really Dividing America? 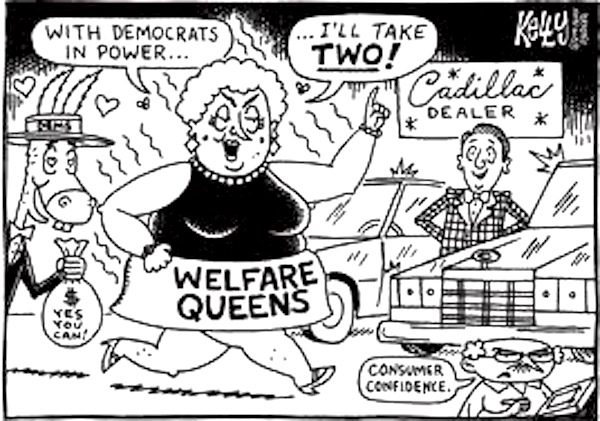 There isn't anything worse than trying to divide America in order to gain political power. We have tended to become desensitized to this sort of thing. During the War on Terror, we spent years being assaulted by this crazy idea that if you're not with "us", you're with the terrorists. That's why I think the use of welfare queens as a symbol of us against them is fairly tame. Welcome to the Clinton Years, take two, with a heavy dose of Reaganism thrown in.

Mitt Romney is running a campaign that will stick it to those nasty welfare queens. This is what he actually ran as a campaign ad:

"Under Obama's plan you wouldn't have to work and wouldn't have to train for a job. They just send you a welfare check, and welfare to work goes back to being plan old welfare," the announcer says in the commercial.

Mitt Romney once asked the Federal government to relax those same rules when he was running Massachusetts square into the ground; his hypocrisy is a given, not a surprise; it's the feature not the bug these days. Romney wants to run Reagan's 1980 campaign all over again, complete with blowing that racist dog whistle all over again. The South will rise again, and throw the usurper out of office. Come one, come all, peckerwoods.

This is why the people complaining about Harry Reid drive me crazy--this is going to be a  nasty election. This is going to be a slime-covered ball of pus rolling down shit-hill on fire. The forces aligned against President Obama are going to unleash something akin to hell itself on the psyche of this country. This is going to be ten tons of hillbilly crazy making Brooks Brothers suits out of trash bags and milk out of butane. It's going to look like the inside of something you don't even want to contemplate dreaming about, son. This is the mind, squirming like a toad, and when it explodes, fetch napkins and listen to the rain coming down.

The Republicans are going to spend hundreds of millions of dollars to spread a message based on lies that will ignore facts, statistics, and the truth. They're going to make up whatever they think will work and to hell with whether it's fair, makes sense, or avoids racial stereotypes. They're going to drive at the heart of the economic and racial divisions in America and get people to start reacting, viscerally, to the idea that someone is getting free money to do nothing while they work three jobs and try to stay afloat.

Going to? I should say they have already begun. And, no. Both sides aren't doing it. That's just the lazy man's way of saying "I don't want to take a position on this mess."

Anyone who thinks that this is going to look like any previous American campaign needs to wake up. This is just the beginning.
on August 07, 2012