Who Gave the Keys to Richard Grenell? 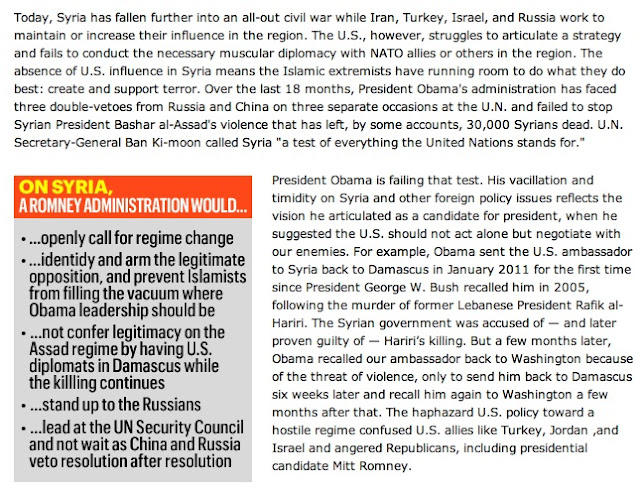 Imagine checking in to read a post by Charlie Pierce and seeing this steaming turd of neoconservative bull-fucking-shit instead.

Why would you let an ignorant shill for the Romney campaign appear in print with this nonsense? The Romney Administration would, in effect, follow the same failed neoconservative foreign policy choices that doomed the Bush Administration. It would involve us in yet another foreign war in the Middle East. It would send tens of thousands of Americans to be wounded and killed for a people who don't want us in their country.

A Romney Administration would "identify and arm the legitimate opposition?" What?

There is no "legitimate" opposition in Syria. These are Sunnis, backed by Saudi Arabia, and they are pushing to create a fundamentalist state that would align itself with the Sunni bloc in the Levant. That's all this is. There are no "freedom fighters" and there are no Oxford-educated democrats who want to bring one man, one vote to the streets of Damascus. They want to institute a government that will follow the trend we see everywhere else--slaughter the opposition, suppress the media and any dissent, consolidate power, and put women back under control.

The Romney Administration would "stand up" to Russia? There is no Russia anymore. Russia is a failed state that has little or no economic power anymore, save when they choke off natural gas supplies to Europe.

What a farce. What a Romney Administration wants is war. More war, more killing, more slaughter, and the ability to say "oops!" and stick the problems to whatever Democrat comes along and has to clean up the mess.
on August 24, 2012