Where Did Romney Live When He Voted in 2010? 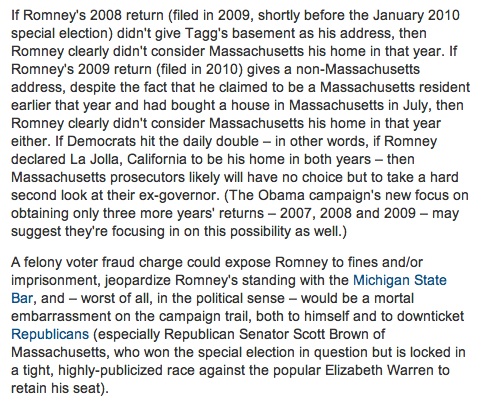 This is the payoff in a rather lengthy article in a British newspaper; take it with the appropriate grain of salt.

I believe that Romney either used his New Hampshire or La Jolla, California address on his tax returns; he then went and voted in a Massachusetts special election and committed felony voter fraud.

That's a damned good reason why he's keeping his tax returns private; not so much for the amount of tax he paid but because they figured out, after the fact, that he committed voter fraud. In and of itself, not the end of the world but truly an embarrassment.

These are all theories, of course, but this one seems very plausible to me.
on August 18, 2012