Whatever Happened to My IRA? 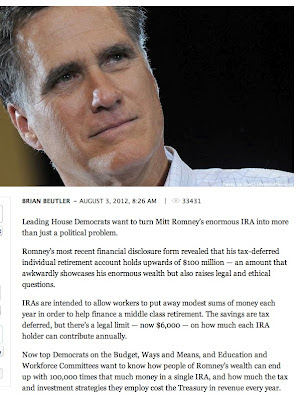 There's nothing wrong with being rich; however, there is something wrong when people notice that how you got rich might be unethical:

“Some experts have expressed the view that the investments made through these accounts and plans may have been assigned a nominal value that was significantly lower than the fair market value of the investments, perhaps using a liquidation value methodology. In particular, this strategy has been cited as one explanation for how presidential candidate Mitt Romney’s IRA is valued at between $20 and $101 million despite the annual contribution limits that apply to tax-preferred retirement accounts and plans.”

To translate, Romney could have skirted the annual contribution limit if his IRA invested heavily in Bain projects by dramatically lowballing the value of the stakes.

If the administration is forthcoming — and why wouldn’t it be? — its answers to these questions will be general, not about Romney specifically. But those answers will broadly apply to Romney and his IRA, and could bring some clarity to one technique people of Romney’s wealth can use to amass even more.

What's your IRA worth? Mine disappeared a long time ago. Perhaps if I had learned how to be a proper predatory capitalist, I wouldn't have to shove fifteen crazy blogs out there and hope for the best.
One of the great fallacies out there is that, by attacking Romney's vast holdings and wealth, Democrats hate success. Far from it. Democrats want success to happen on an even playing field. That's the American way.
on August 03, 2012