Todd Akin is Getting a Really Bad Break Here 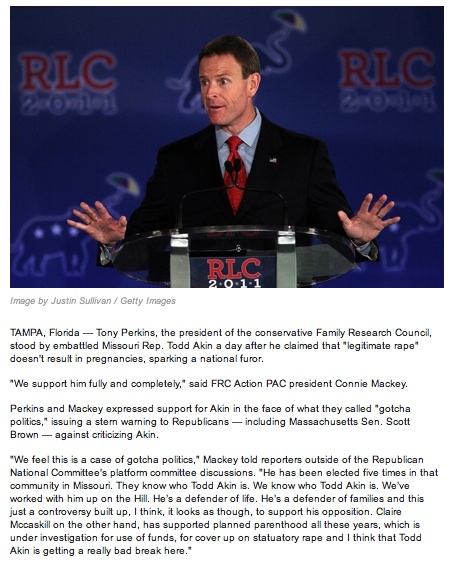 The Family Research Council has gone full metal wingnut, fully and completely, with no stops on the way to crazy town. They have doubled down and made nuttiness their bitch.

The number of people abandoning Todd Akin grows by the moment. Literally, by the time I hit publish, the FRC might well be on their way to publishing their own condemnation of his lunacy.

Be that as it may, the real story is not so much Akin or the FRC, it is the extremism of the Republican Party. They have become so extreme in their defense of life it is a wonder more people aren't tearing around with their hands in the air, screaming like maniacs. The amplified extremism of the Republican Party right now has reached a fever pitch. These people are seriously--seriously--held in the thrall of the most deranged and demented people I have ever seen in public life.

Think back to the 1980s and 1990s. There were always nuts in both parties. In the Democratic Party, the nuts are still well off the stage, consigned to making their own outrage out of blog posts and the occasional Fox News appearance. The nuts on the right are in charge; they're telling people what to do. The nuts on the right are holding Senate seats and positions of major influence and power.
on August 20, 2012