The Romney Campaign is a Disaster 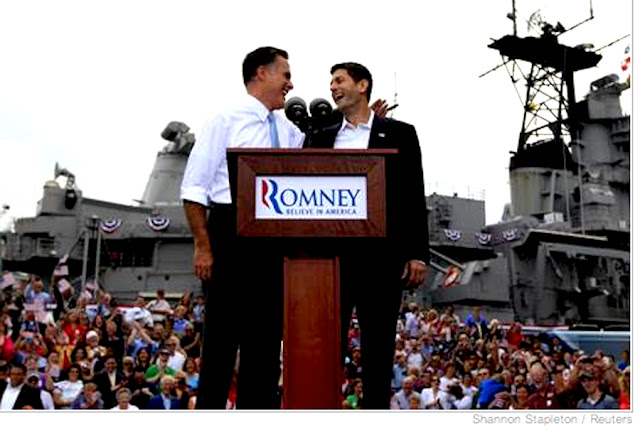 The first thing that I thought of when I saw this photo was, "where is the Mission Accomplished banner?"

Seriously, it made me think of this visual: 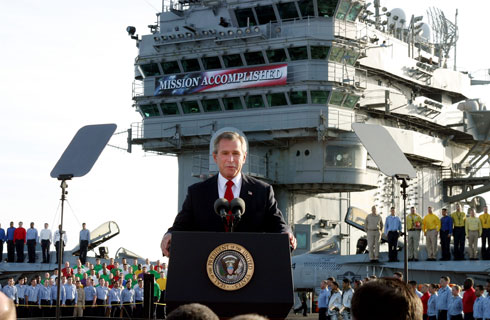 Note Bush's teleprompter--and the use of the uniformed military as a stage prop--and then tell me that there aren't similarities in how Romney chose to make his announcement today with the single most defining moment of overreach and FAIL from the previous Republican administration.

The Romneyshambles (God, I do love that word) continues unabated. Without his own teleprompter (thanks to the wingnut criticisms of President Obama's use of the device), Romney stammered through another bad speech, but managed not to utter another whopper like "sheik" instead of "Sikh." A noticeably younger man named Paul Ryan stepped up, without a tie, of course, because he's the junior partner to the senior executive, you see, and spoke about turning something around.

What, exactly? A disaster-ridden Romney campaign? America? Isn't he a prominent member of the House of Representatives, which is under his party's control? Isn't he part of the problem, then?

In any event, Romney's half-witted hired help couldn't even come up with a Romney-Ryan sign or logo (they were forced to use the standard campaign iconography, probably due to the fact that this announcement arrives at exactly the moment no one cares), nor could they figure out anything more than half-moon bunting for the superstructure of the USS Wisconsin. I realize that Ryan represents Wisconsin, but this visual made me think of the fact that neither of these men have served in the military.

President Obama and Vice President Joe Biden have no service, either. Are they using old, moth-balled battleships for campaign props? This is the announcement of the campaign's most significant decision to date; why draw attention to the fact that Mitt Romney went to France during the Vietnam War to not convert anyone to Mormonism?

And, really. If you're the Republican nominee for the presidency, and if you really did spend the Vietnam War in FRANCE not doing much, why would you stand on the deck of a World War II battleship and draw attention to the fact that you didn't serve in the military during the Vietnam War and that you did, in fact, just go live in France? Why, why, why?

The Romney campaign is the worst ever, bar none. And it isn't even the middle of August yet.
on August 11, 2012