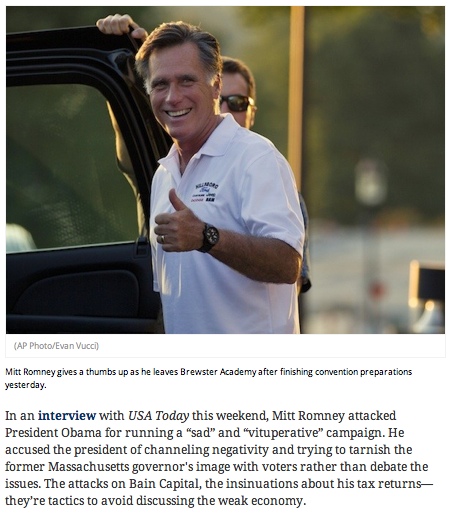 The American Prospect goes a little too far with their inside baseball analysis here, but I don't find much I can really disagree with. I would say that things right now are much simpler than they are making it out to be. Romney is a fraud and a fake; he is so artificial that he appears to be something out of a robot factory. People do not connect with fakes.

There is a likability gap, and Obama is crushing Romney:

We have not even begun to factor in the effect that the extreme and bitterly un-American positions taken by much of the Republican Party over the last few years is going to have on American voters in November. The Democrats are now running full tilt with a strategy that is highlighting just how far outside of the mainstream--and how extremely anti-common sense--the Republican Party has swung.

The economy is not giving them any traction. It should, but it isn't. The bottom line is, people don't know anything yet because we haven't had any debates. It's still far too early to get comfortable if you want Obama to win. There are a lot of news cycles left; what they throw at each other between now and the end of the World Series is going to be the thing that defines this election. It'll be negative. So what?

The effect of this is going to be one of two things: either the extremists will continue to drag the party back to the 11th Century in order to become a regional party forever or moderates will come back into vogue. I would bet on a return to the glory days of the rack and the plague.
on August 27, 2012