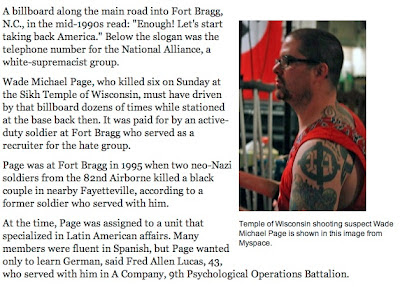 Gina Barton commits journalistic malpractice in the second paragraph of her piece about Wade Michael Page for the Milwaukee Journal Sentinel. I'm shocked that more people haven't picked up on it.

Her assertion that Page "must have driven by that billboard" tries to make a fact out of something that cannot be verified. Page might never have driven by or seen the billboard; how does she know?

The fact that Page was a dangerous extremist is fairly evident in the fact that, hello, he's standing under a Nazi flag; but for her to connect what was going on at Fort Bragg in the mid-1990s is a bit of a stretch. This is the kind of thing that would be seized upon to discredit her extended article, which shows definite links to hate speech and hate groups. Why undermine yourself like that?

If Alpha Company was oriented towards Latin America, which company deployed to Bosnia, then which company handled Russian/Slavic languages?

A U.S. Army soldier from the 9th Psychological Operations Battalion distributes a U.S. faction newspaper to a passing driver in the town of Odzak, Bosnia and Herzegovina, on Jan. 19, 1996. The newspaper is designed to inform the town's people about the NATO Implementation Force (IFOR) and Operation Joint Endeavor. The 9th Psychological Operations Battalion is deployed from Fort Bragg, N.C. DoD photo by Pfc. Michael J. Nelson, U.S. Army.

This would correspond to the time when Page was in the 9th; was he deployed?

A number of people will also try to make hay out of the fact that he served in the "Psy-Ops" part of Military Intelligence. I doubt very much whether he was ever deployed; if he did a tour in Latin America, it was probably in Colombia, and he was probably drunk all the time there as well. He fits the profile of someone who was drunk on duty a lot, and was of very little use to his unit. His service was probably incidental to the Army and his First Sergeant was probably very happy to put him out of the military.
on August 08, 2012