Now We Can Call For a Lifetime Ban For Melky Cabrera 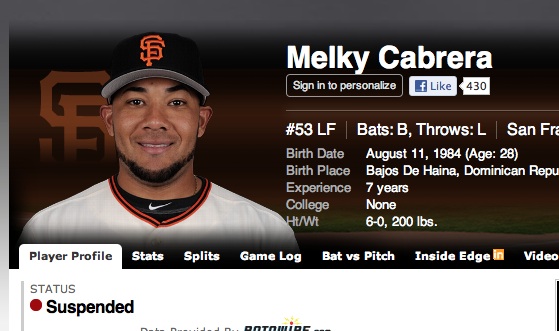 I suppose that if we had left it at a fifty game ban, everything would have ended there. This is what they call a WTF moment:

San Francisco Giants star outfielder Melky Cabrera mounted a campaign to avoid his 50-game suspension that included a fake website featuring a fictitious product in an effort that was quickly uncovered by MLB investigators, the New York Daily News has reported.

Citing an anonymous source close to the case and an associate who told the newspaper he was "accepting responsibility for what everyone else already knows" concerning the fake site, the Daily News reported famed investigator Jeff Novitzky and agents from MLB's investigative arm have begun looking more closely at Cabrera and the scheme purportedly hatched in July as they seek the source of the synthetic testosterone found in his urine.

"There was a product they said caused this positive," the source told the Daily News. "Baseball figured out the ruse pretty quickly."

You have got to be kidding me.

Cabrera should be banned. For life. Starting yesterday. And that should be the end of that nonsense.
on August 19, 2012