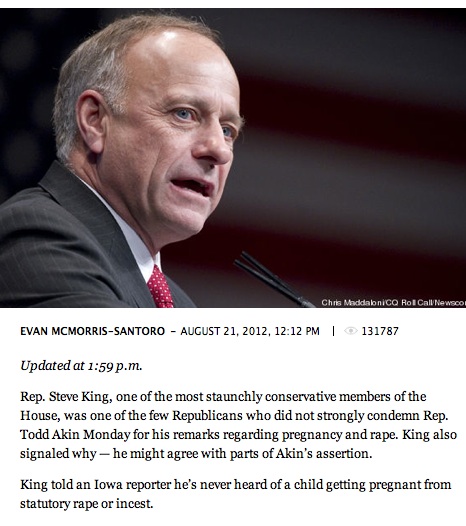 These fuckers are waging it, full blast, and they will continue to double down and speak their minds and the difference between whenever and now is that these men--King, Todd Akin, Rush Limbaugh, Jim DeMint--are in positions of power and influence. These are not fringe players. These are not the backbenching wackos of yesteryear. They are elected officials or string-pulling influencers. You have any number of Republicans who spout crazy talk and then get away with it--birthers, liars, cheaters, haters and racists. They are personified by the Family Research Council, which, yesterday, doubled down and backed Todd Akin. These are the people awarding Donald Trump prime time at their convention. These are the people for whom the idea of common decency means absolutely jack shit nothing squared if it means going against their gut, their instinct, and all of the internalized nonsense that they cling to like a security blanket.

UPDATE: Flopsweat and panic much? Hunter at the Great Orange Satan has an excellent roundup on how King and his staff are frantically trying to walk this one back...
on August 21, 2012