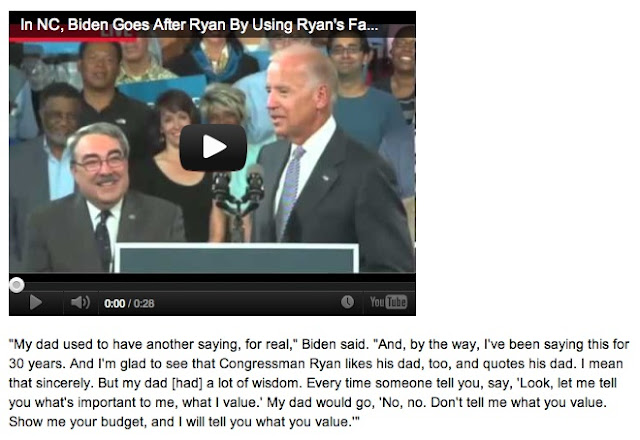 The Vice President isn't taking a shot at Paul Ryan's father; he's taking a shot at Ryan himself. He is defining Ryan with his own policies and actions. Joe Biden is a tough politician, he's taking body shots that are landing. This is why the Republicans are so scared this cycle--Obama and Biden are not going to flop and work the refs. They're all elbows and speed. Ryan doesn't have a legislative record to run on--he has a series of "serious" proposals that have been designed to eliminate the social safety net. They have to hammer him on this and that is exactly what they are going to do.

Did you notice something? President Obama isn't windsurfing right now. Biden isn't working on his Trans Am (I'm waiting for the jackasses at Breitbart to fall all over their FAIL and claim that Biden neglects the dignity of his office by washing his car shirtless). They're out there running like they're behind and it's the end of September. This is what's so different--Democrats are fighting hard and they're not giving up.

In a matter of days, the Obama campaign has crushed Romney's momentum. It didn't help matters to have Romney announce Ryan as his running mate on a Saturday and all but ensure that the American people would be more interested in their vacations (what few actually still have them) and the single defining decision of his candidacy. And Biden's shot at Ryan is double-edged: Ryan used his Social Security death benefits to help him overcome the loss of his father. Ryan has repeatedly proposed policies that would slash or eliminate those benefits for others.

Show my your budget--and I'll show you what you value--that's a shot to the gut for a clown like Ryan. In a week, Ryan will be lucky they're not already running the third version of an ad which explains why he opposes abortion in cases of rape, incest and to save the life of the mother.

So, after this video, the Weekly Standard very lamely adds the fact that Ryan's father is deceased. This is exactly why the Republicans aren't winning right now--they're whining about how tough this game is. They're whining because the rhetoric is cutting them off at the knees. They're losing, and all they have left is to complain that the game they used to play is now being played by tougher, faster, smarter players.