Bear in Mind That Todd Akin is Already in Congress 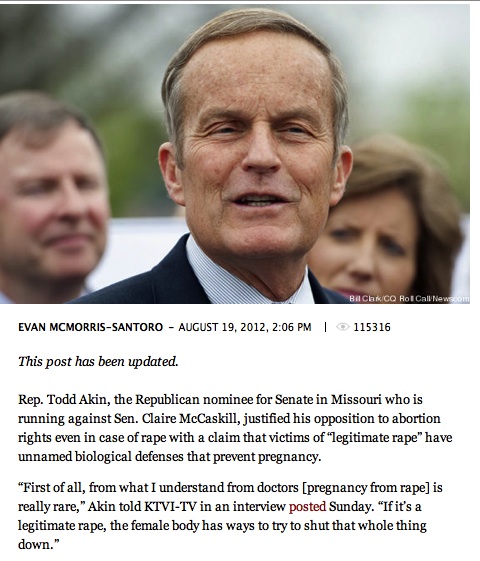 "Doctor" Akin is merely representing mainstream Republican thought. If you're a woman, you should not have any control whatsoever over your own body--especially since it has heretofore unproven abilities to "shut that whole thing down" by itself.

If you're a woman and you use contraception, you're a slut.

If you're thinking of having an abortion, you have to have an invasive transvaginal ultrasound.

If you're a Catholic, then and only then do the archaic rules of your religion, dictated to you in a foreign land, trump those of the Constitution of the United States of America.

Got that, honey? Your body belongs to Doctor Akin, and to the Republican Party for which it stands, somewhat divisible depending on what day it is, their nation, definitely under God, with liberty and justice only for the white people who run things and have money. Amen.
on August 19, 2012