America's Debt Did Not Just Grow by 11 Trillion Damned Dollars 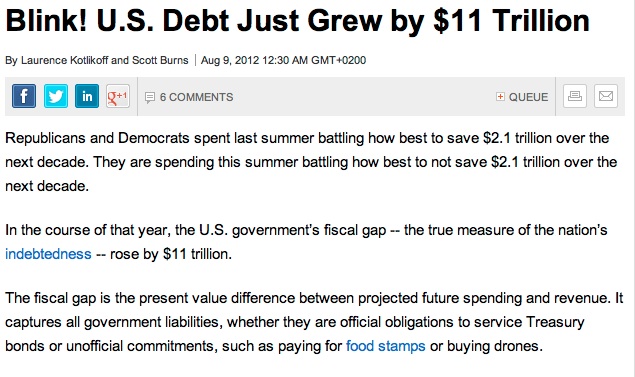 The "fiscal gap" could be applied in virtually any decade against any President and show them to be worthless, filthy liars.

If we could get more Americans back to work, this "projected" gap would shrink considerably. But, even as it is, this is not "debt." This is what someone says we will owe if nothing happens. I can project anything I want and make up numbers and throw a crazy headline out there--anyone can do that and get away with it. This is where we are in politics now. Facts mean nothing. Looking at our situation and saying that we have $11 trillion dollars in new, magical, projected debt is inherently dishonest.

In reality, quite a bit will happen to adjust these numbers. The political obstructionism of the Republican Party will not continue forever.

Clearly, in American politics, something will happen, and that means these liars will look even more foolish than they already do.

And, besides. Want to know how to make the debt as an issue go away overnight? Elect a Republican President.
on August 09, 2012