Who Would Believe John Edwards? 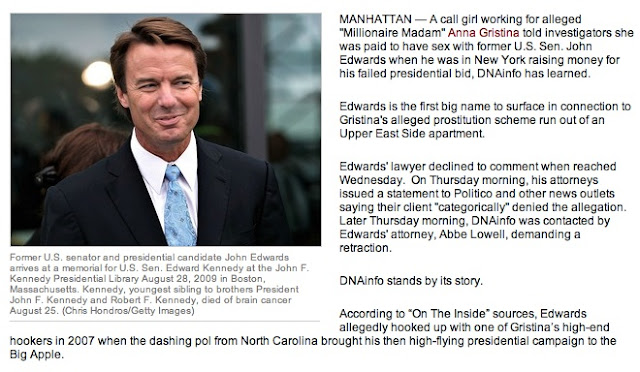 There was a time when I might have defended John Edwards. Back when they were gunning for him, I simply could not believe that he was this stupid. I was as wrong as could be on that front. John Edwards has the kind of self-destructive hubris only the worst of our society can muster. What a shame.

Were it not for his past transgressions, this would be easy enough to defend him against. This would be the same nonsense that gets used against anyone who challenges the status quo and runs as a populist. This is how politicians are smeared and ruined. Where's the proof? Why are we finding out about this now?

Well, John Edwards turned out to be a man of extremely poor judgement who had a very high opinion of his ability to do whatever he wanted and get away with it. Think of the disaster the Democratic Party would have faced if he had actually become the nominee; think of how damaging it is that he was, in fact, the party's nominee for Vice President.

He can deny it all he wants; the problem is that Edwards has no credibility. There's no reason to believe him or defend him. He has used the worst judgement and the worst political instincts imaginable to end up being a has been and a never-was on the national scene. I hope he finds some sort of peace in his later years.